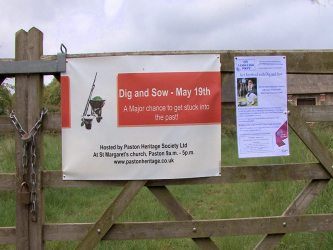 The map shows the village of Paston and the various test pits that were dug for the 'Dig and Sow' project of May 19th 2012. All markers show where a pit was dug; the red markers with the film icon show the ones where there is a video record for that location. More video sequences and further information will be added in due course.

The 'Pottery Reports' from the team at Cambridge University have been entered for each of the sites. However, please note that the reporting so far only covers pottery, it does not cover other finds which indicate other activity - such as the potboilers at pit 23.