Blofield and the Pastons

The parish of Blofield is eight kilometres to the east of Norwich. Its oldest building is the the parish church of St Andrew and St Peter, believed to have been built in the late 14th century. Today there are a number of tombs and monuments to different members of the Paston family in the church, dating from the early 17th century. 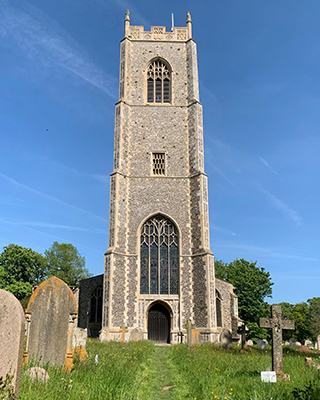 The parish church of St Andrew and St Peter The manor of Blofield was acquired as a reward for service by Thomas Paston in 1541, when Henry VIII gave him several ecclesiastical properties at the Reformation, including Binham Priory and Thorpe Hall. Thomas was one of at least six children of William Paston and his wife Bridget Heydon. Their marriage had united two families who had been at loggerheads through much of the 15th century – and it was a great match because, as it turned out, they would become the ancestors of all the remaining Pastons through a male line.

Gentleman of the King's Bedchamber

Thomas followed his illustrious grandfather, John Paston III, to court and achieved the high honour of becoming a gentleman of the King's bedchamber – not bad, since his grandfather had fought for the opposition in the Wars of the Roses! To do this he must have been highly favoured by Henry VIII, as his lineage was not that grand.

Thomas was probably the “Mr Paston” who was being paid for teaching Princess (later Queen) Mary to play on the virginals in 1536-37. He also played a prominent role in the defence of Norwich during Kett's Rebellion in 1549.

Writing with a quill at a Paston Heritage Society Blofield event.Thomas's brother Clement was a famous sea captain. Having no children of his own, Clement was generous to Thomas's son, Edward. Clement had received the Horton estates in 1552 from King Edward – they had previously belonged to the disgraced Duke of Somerset – and he also gave Edward these estates and the land for Appleton Hall, where Thomas's grandson Edward eventually lived.

Dangerous years of Elizabeth I

The first Edward whose monument is on the north wall of the chancel of St. Andrews and St. Peter's church, was Thomas's son. He was born in 1550, when Edward VI was on the throne, and lived through the reigns of Mary, Elizabeth I and James I, dying in 1630 during the reign of Charles I. It is curious that Thomas died the year Edward was born – 1550 – and so Edward VI became his godfather, a high honour. But Edward Paston was a Roman Catholic in the dangerous years of the reign of Elizabeth I, and his line remained resolutely recusant (which means they refused to attend Anglican services). This is why his descendants married into the tight-knit recusant circles of the time. His choice can only have been an act of conviction, as these were dangerous times for Roman Catholics.

Edward on this web site

There is a small collection of letters from Edward to Katherine amongst those that were published by the Norfolk Record Society in 1942, edited by Ruth Hughey – these are online on this site as part of the Paston Footprints project. Use the search terms 'From' Edward and era as 'Early 17th century'.

Officers of the Norfolk Record Society were diligent in depositing documents with the Norfolk county library service before there was an official archive service, and one such document was Edward Paston's Town Book of 1586, giving a detailed account of ownership of lands in the parish. It is a typical East Anglian Town Book or terrier of its open fields. From the link you can see the pages of the book itself. It is written in Latin and a translation is provided - not a strict word for word translation but the information set out in a tabular format, with details inferred from the original document. The accompanying notes provide more insights into the parish of Blofield in Elizabethan times.

Edward was a patron of William Byrd and Thomas Tallis and an accomplished musician and linguist himself. He transcribed by hand five books of lute music for use in his household, and these are in the British Library. He is said to have put together one of the largest collections of music manuscripts from the Elizabethan era. 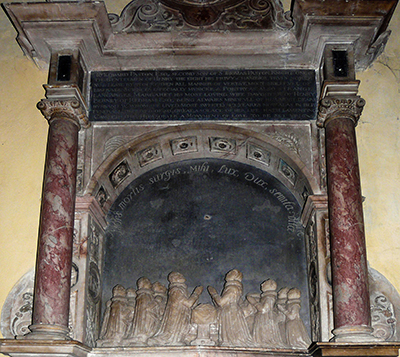 Braydeston Church, less than a mile from Blofield Church, has a 14th century octagonal font bowl and a brass to Osbert Berney who was wounded by an arrow at the siege of Caister Castle in 1469 when he assisted the Pastons in the castle's defence. The Berney family also paid 40 shillings for rebuilding the steeple there. So the Berneys and the Pastons were clearly close: their estates adjoined each other in this part of Norfolk.

Strong connection to the manor

The monument in Blofield Church confirms their strong connection to the manor here. The Paston home, the Manor House, now vanished, was a former Bishop's Palace. This and the Bishop of Norwich being the Lord of the Manor gave the parish an important status.

Edward, who built at Appleton rather than Binham for his main Norfolk home, had a son called Thomas who was succeeded by three further Pastons, two of whom were buried at Blofield: Clement of Barningham, who died in 1662 in the reign of Charles II; and his son, another Edward (1660-1713), who died just before the advent of the Hanovers to the English throne.

This second Edward (later succeeded by a third) was therefore the great-grandson of the first one and lived at the same time that the main branch of the Pastons reached its apogee with Robert, the 1st Earl of Yarmouth (1631-82) and William, the 2nd Earl, whose death in 1732 brought that main Paston line to an end.

Not much is known of the Blofield line after the death of the third Edward, but descendants of Thomas's brothers William of Appleton and Edward of Horton (grandsons of William and Bridget) continued for a while until no male heirs were forthcoming. Appleton Hall itself was burned to the ground in 1707, rebuilt and later fell into ruin.

The second Edward is remembered especially because of the compliment he paid to his second wife, Margaret Eyre, who came from Derbyshire. She died very young in childbirth, and he arranged for the poet laureate John Dryden (1631-1700) to write a moving epitaph to her which can still be seen on her tomb on the floor of the chancel. 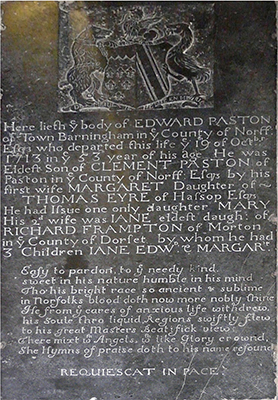 Soe fair, soe Young, soe Innocent, soe Sweet
soe ripe a Judgment and soe rare a Witt
Require at least an Age in one to meet
In her they mett, but long they could not stay
Twas Gold too Fine to fix without Allay
Her Maker's Image was so well exprest
the sight of her upbraided all the rest
Too justly sever'd from an Age like this
now She's remov'd the World is off a peice

This poem is unique in that it is the first 'published' text - inscribed in 1689, over 20 years before its first appearance in print, which was in 1712 – where it was notably different from the Blofield version in several details of its phrasing (for instance, "Heaven's image" instead of "Her Maker's image").

Connections between the Pastons and Dryden

There were strong connections between the Pastons and Dryden, who was also a Catholic. Margaret Eyre's mother was the sister of Dryden's niece's husband. Dryden's wife, Lady Elizabeth Howard, had a niece, Lady Anne, who had married Margaret's maternal uncle, Henry Bedingfeld, 2nd Baronet of Oxburgh Hall. Jane Frampton was Edward's first wife; their son would be heir to Edward. Her younger sister was Mary Frampton [1677-1698], the subject of another elegy by Dryden.

Margaret Eyre was a descendant of Thomas's brother Edward of Horton, and so a distant relative of her husband. Her grandmother (1619-1702) was one of many Margaret Pastons, and she had married Henry Bedingeld, the 1st Baronet. Their son-in-law, Thomas Eyre, was Margaret Eyre's father.

By a peculiar twist of history the name of Paston continues today because of another Margaret Paston, believed to be a descendant of the second Edward's cousin John, who was married to Frances Tichborne.

Although there is a floor memorial to a Colonel John Paston in Blofield Church, the date of death given does not make sense for that John: at 1655, it is too early. Colonel John is almost certainly one of the nine children of Edward Paston and Margaret Berney.

The last Margaret Paston married the 6th Baronet Henry Bedingfeld in 1826 on condition that he joined her name with his. As a result the current Sir Henry Paston-Bedingfeld, of Oxburgh Hall, is patron of the Paston Heritage Society.