The decisive Yorkist victory at Towton in 1461 created difficulties for the Paston family. The Duke of Norfolk, emboldened by his crucial intervention at Towton, seized Caister Castle. John Paston’s response to the challenge was to place his elder son at the Court of King Edward IV and his younger son in the household of the Duke of Norfolk at Framlingham. This strategy took some time to have an effect and for a number of years it looked as if John Paston II was enjoying himself at the expense of the family interests. However, jousting on the King’s team at Eltham showed how much progress John II was making. John was injured in a joust. John III was with Norfolk’s household during the consolidations of territory that followed Towton. John wrote home to describe his experiences. 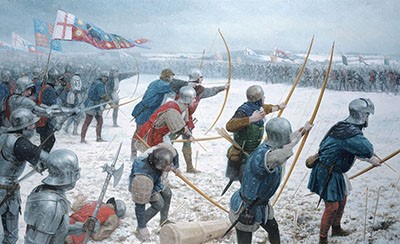 John Paston I was imprisoned in the Fleet following the accusations of his enemies, many of which were based on claims about the Paston family’s lack of social status. A Letter from Margaret mentioned her husband's imprisonment. Lawlessness in East Anglia also contributed to a number of violent attacks on the Pastons, their relatives and the family’s interests.

In 1465, the Duke of Suffolk, another rising Yorkist figure who had successfully supported the King at the Battle of Towton, ruthlessly attacked and sacked the Paston house at Hellesdon. Margaret wrote to her husband to describe the damage.

For much of the 1460s Margaret Paston was responsible for managing the Paston interests whilst her husband was in London and her sons were also away from home. Many of the Paston letters were written at this time as the family maintained their links with each other.

Shortly before John Paston died in London in 1466, the King recognised the gentry status of the Paston family, thereby removing an important obstacle to their progress.

By 1469, Caister Castle was back in Paston hands but later that year the Duke of Norfolk laid siege to the Castle with a force of around 3000 men. Despite a stout defence, with only a handful of men, John Paston III had to surrender. Margaret wrote to her eldest son to describe the outcome of the Siege.

In 1471, with the Duke of Warwick’s rebellion and the subsequent exile of King Edward, the Paston fortunes seemed to be on the rise with the return to England of their patron the Earl of Oxford.

King Edward’s own eventual return to his kingdom was thwarted at Cromer when he feared Oxford’s men. However, the King did land further north at Ravenspur and raised an army to march south and confront Warwick and the Lancastrians. The Battle of Barnet followed and both John Pastons II and III fought for the Earl of Oxford, John Paston III suffering an arrow wound to the arm. John Paston II wrote to tell his mother about the injury to his brother.

After the defeat at Barnet, the Pastons were pardoned and served time with the garrisons in Calais. In 1476, following the death of the Duke of Norfolk, John Paston II finally secured ownership of Caister Castle. In 1479, a terrible year for the family, with the plague rampant, John Paston II, his grandmother Agnes and his younger brother Walter all died.

In 1485, The Duke of Norfolk invited John Paston III to join him at the Battle of Bosworth. Norfolk's instructions were very specific. John avoided the invitation and avoided another defeat in battle. In the great Lancastrian triumph at Bosworth, the Earl of Oxford became a key ally of the new King Henry VII. John Paston III became Oxford’s deputy and fought with his patron once more at the final major engagement of the Wars of the Roses at Stoke in 1487. John Paston was knighted on the battlefield and the Paston family fortunes were secured.