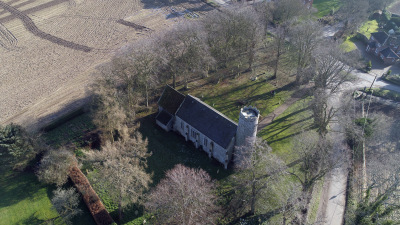 Gresham Parish ChurchGresham and East Beckham appear early in the medieval Paston story, being two of the manors on which Judge William had his eye as possible acquisitions. Colin Richmond's authoritative and detailed account of the medieval Paston story begins in Gresham Church, as he observes the Latin inscription asking for prayer for James Catt, gentleman, possibly a contemporary of Judge William Paston as he sought to purchase the manor to enhance his own status as a gentleman.

Our great interest today is in Gresham Castle, on private land but in the care of Historic England. It was built by Sir Edmund Bacon but by William's purchase became a home for John Paston and his wife Margaret - though in their restless times, property could be acquired by force of arms rather than by legal purchase, or by the skill of a lawyer in getting the best deal for himself.

Gresham in the Letters 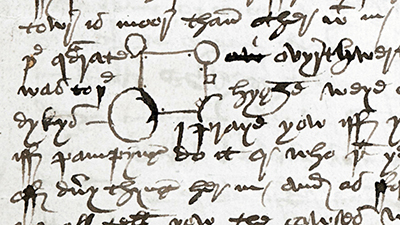 A letter extract with a sketch map of the castle at GreshamAs with all the places in the Letters, there is a variety of spellings. Grassam, Grassham, Greasham, Gresam, Gressam, Gressham and Gresham are one and the same. There's the added complication, when searching the Letters, of James Gresham being one of the Pastons' servants.

By 1460 John Dowbigging is writing to John Paston, the Lordship of the Pastons is clearly recognised. (We should mention that Perys (Edmund Piers), who was tied to a horse and imprisoned, writes of his woes himself in later letters.

To search for places mentioned in the letters there are two principal ways you can go. Within the Paston Footprints project it is possible to use the letter search facilities to find references to places and people. Behind the scenes our volunteers have undertaken a substantial task in cross-referencing the many and various spellings of place names and personal names, to enable you to carry out searches. You can also search for places by use of the map search page and following the instruction there. 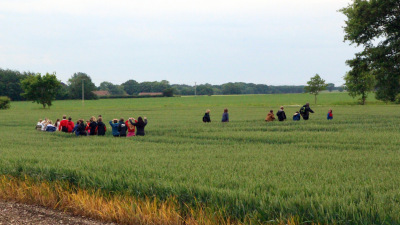 Pupils from Gresham Primary School follow the path across to the castle.In the first phase of the project, the meeting was with pupils of Gresham Primary School - appropriately enough at the castle! The school had made special arrangements with the landowners for access to the site, after essential safety checks, a whole class made their way across the field to meet Margaret Paston and one of her retainers.

Margaret told her story, and her faithful man explained some of the measures – abortive as it turned out – that he intended to use to thwart those intent on seizing the castle. Then the children carefully crossed the moat to explore the ruins of the site, seeing walls that were razed to the ground 600 years ago.

The next meeting was with the people of Gresham – those interested in the heritage of the village. Little did we know at the time that the coming 21st century 'plague' would prevent the intended follow-up, but useful discoveries were made, from previously unknown coats of arms in East Beckham Hall, to stones from the castle in the walls of houses today. More exploration is needed! 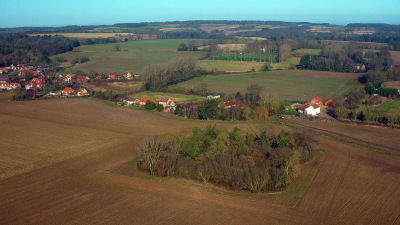 Church, castle site and village from a drone's eye viewWhen we undertook drone photography at Gresham in the early spring of 2020, little did we know the restrictions we were going to live under for the next 15 months. The job was done just in time.

The ideal weather for drone photography is cloudy-bright, to minimise shadows. However, needs must on some occasions, and it is as well that we proceeded, or we wouldn't have been able to get on with the modelling as described below. We waited an hour for the whiteness of the frost to clear from the ground, but the sun was still at a fairly low level when we began videoing at about 11am.

The technique for landscape photogrammetry is to cover the area required from several heights and angles all around the centre of the area. In this instance it was two flights around the castle for oblique photographs, and then overflying in a pattern that enabled vertical photography of the site. The software on the computer - over several hours - does the rest of he job, if all goes smoothly.

We took the opportunity to overfly the church as well, as it is another village building that certainly dates to medieval times. Doubtless the village was centred on church and castle in those times, though it is now split into two distinct sections.

The Castle and the Model 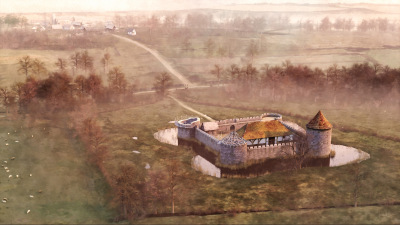 Morning mist rises from the moat at Gresham Castle.The drone survey was one of the first phases of building a computerised model of the castle. While some of the Letters give us clues, and other documentation helps with Bacon's building of the manor house and his obtaining permission to crenelate it, it is not clear what was built when. Our modeller created a documented account of the guidelines he would follow. Historic England, the landowner, other documentary evidence and the remains of the castle walls still in situ were used for reference. Modern aerial photography and techniques such as LIDAR all help build up the picture and we have John Paston's letter to his brother John with its small sketch of the castle layout..

On the page which gives an illustrated run-through of the process of the building of the model, you'll see the models from the drone flights and the main model itself as it takes shape. With the model completed, it can be used in all sorts of ways - in the illustration here to create a view from the south with the church and village in the background. 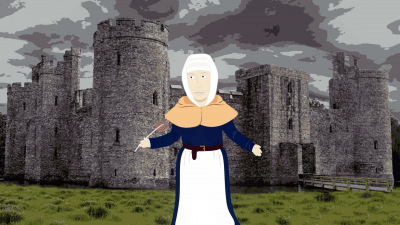 Our animated Margaret recalls her story at Gresham.The redoubtable Margaret Paston, left so often by her husband John to look after the family affairs in Norfolk while he was in London, recorded many of her travails in her letters to him. For our younger readers we've asked Margaret to tell something of her own story – in particular the events at Gresham when she tried to defend the castle.

Her son, the second one to be called John, makes a guest appearance in his youth as he writes a letter for her, and then as an adult knight, when he is called upon to defend Caister Castle.

You can view our animated video along with the other characters grouped together. Some of them are also used in our Education section, along with a selection of learning materials for classroom or home. In the Key Stage 2 section, the 'Siege of Caister Castle' is one of the units with such materials. 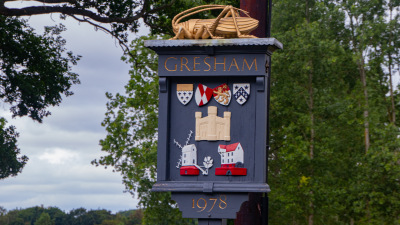 Gresham's history is told in the village signFor each of the Footprints hubs, we've established a trail and activities – the former for adventurous walkers, the latter for families to explore more locally. With the help of Norfolk County Council, these are now well-marked trails; look for the blue markers with the griffin logo. You'll also find a printed map, or you can follow a map available online.

If you can't get out and about yourself, you can also follow the walks and listen to the podcasts on-screen from this web site or from the Paston Footprints web site. Later in 2021 you'll be able to access a Phone App to act as a guide as you walk and supply a podcast for various locations. There's a web-based version of the Phone App, and in due course there will be a version available from the Google App store and the iPhone App store.