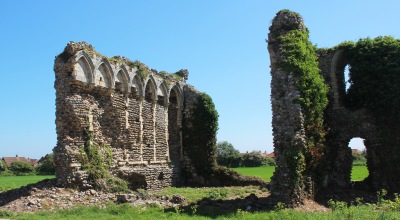 The chapter house in the 21st century. The site is on private land.The distinctive remains of the priory of Bromholm stand on private land on the edge of the village of Bacton. The north gate is at the end of Abbey Street; in its time the site has been referred to as an abbey rather than a priory, but given the lack of clear distinction between the two terms, that is not surprising. Headed by a prior, Bromholm Priory is generally accepted as the correct title. All the subsidiary houses of the abbey of Cluny in Burgundy were referred to as priories. Bromholm itself was founded as a subsidiary of Castle Acre in Norfolk, but eventually became independent in 1298.

The Cluniac order followed the rules of St Benedict. The reforms of Bishop Odo in the 10th century attempted to focus back on traditional monastic life, encouraging art and care for the poor through the Cluniac order. Cluny itself was founded in 910; Bromholm was established in 1113 by William de Glanvill and the charter includes the churches of Keswick (now lost to the sea), Paston, Dilham and Bromholm.

At the time of the first William Paston of the Paston Letters, the beginning of the 15th century, tradition was that a family ancestor, Wulstan, was involved in the founding of the priory. 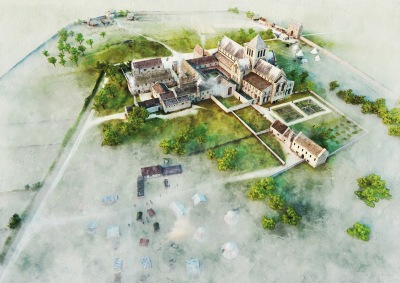 A depiction from the Footprints 3D model of an evening mist over Bronholm.The foundation might have remained a provincial monastery but it became a national pilgrimage site on acquisition of what was said to be a piece of the 'true cross'. It seems that this ancient wood was fashioned into the shape of a cross and became a subject of considerable veneration at the priory. Such an object or 'relic' - and there continue to be such relics held by many churches today - would draw people to Bromholm.

The English chaplain Matthew Paris (c.1200-1259) gave an account of fleeing the sack of Constantinople in 1204. His price for giving it to a monastery was that he and two of his sons be accepted as monks in the monastery receiving it; Bromholm was the first place to believe his story. One of the benefits of his account of this was his brief glimpse of the priory, it was "very poor, and altogether destitute of buildings". Miracles were said to have taken place and pilgrimages are recorded from 1223. The Kings Henry III and Edward II were amongst those who came. As a place of religious repute and as a place of business, Bromholm was on the up. Two prominent texts from medieval times, Chaucer's Canterbury Tales and Langland's Vision of Piers Plowman indicate that it had gained a national reputation.

Whilst essentially religious institutions monasteries were also business enterprises, and accounts needed to be kept. For the year 1415 to 1416 John Reppes was Cellarer at Bromholm; Clement Chandellier was prior at the time. Reppes had to keep a complete record of invoices due to the priory and the payments received. From his accounts we can see the wages of staff of the priory, how much male and female staff were paid, farming and trading by men and women, prices of items bought from near and far and goods imported from abroad. Bromholm owned property at that time in 56 Norfolk parishes and 16 Suffolk Parishes, and some of the income derived from them found its way to the Cellarer's department.

From his accounts we can find that the gifts to the Holy Cross were £32 4s 5d for the year. Pilgrims who wanted to benefit from the Holy Cross clearly provided a significant income to the priory. When these accounts were written William Paston I was a young lawyer and steward of all the courts and leets belonging to the Bishop of Norwich; he was chief steward of the priory.

Income came from two annual fairs, expenditure is recorded for the washing bill, large quantities of fish were bought from Cromer whilst Cromer men bought much malt from the priory, tenants of priory land had to pay their rents whilst expenditure included much for timber and this particular year for 300 kilograms of lead. The Cellarer's accounts cover many more incomings and outgoings.

From the Cellarer's report, we can discover that there were fifteen monks, of whom 11 were priests, resident in that year. By 1466 the number fell to ten and at the time of the suppression of the monasteries in 1536 just four priests remained, though with 30 other persons such as servants and labourers.

William Paston and the Dispute 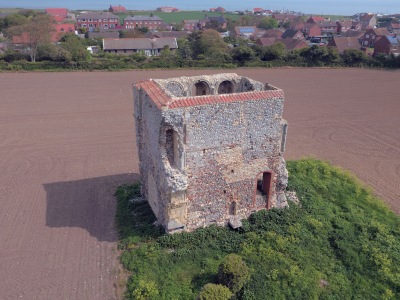 The north transept of the nave; it can be viewed from the public path by the houses.The daily routine for the Cluniac monk was eight services in the church. At the services they would chant religious songs and pray. The services would begin at midnight with matins; lauds was at 3am and services continued through the day until vespers at 6pm. Monks were encouraged to be silent and if they did speak, it should be quietly gently and briefly. Meals were taken twice a day and meat was not on the menu.

In 1418 the monks of the convent elected Nicholas to become their new prior. However, it appears that a John Paston or John Wortes was made prior by papal appointment. Nicholas wrote to Judge William for his support but it seems that Wortes/Paston - probably not a relative of the main Paston family - succeeded in establishing his position. William Paston worte to colleagues to endeaavour to make the case against John Paston/Wortes, particulary in that he had become a bishop in Cork. he had The Roman court found against Nicholas and Judge William. Paston/Wortes had his position confirmed in 1426 and William refers to him as "this cursed bishop of Bromholm".

Wortes/Paston seems not to have resided at Bromholm for a number of years and resigned in 1430. William Paston wrote to the vicar-general of the Cluniac order in England to try and help resolve the situation. 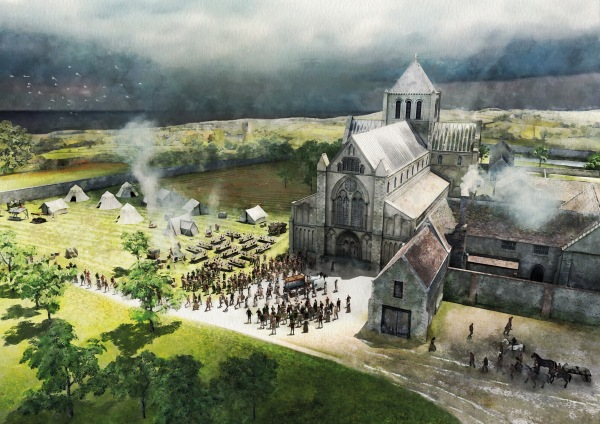 Historic artwork derived from the Footprints 3D model; the funeral of John Paston enters the church.John Tyteshall became prior in 1460 and two of his letters appear amongst the Paston collection. John Paston I died in 1466, during Tyteshall's time, leaving the request that his body be buried at Bromholm. He had died in London and his body was brought with great ceremony over six days to Bromholm, with an overnight stop and service at the Paston's church in Norwich, St Peter's, Hungate.

The historian Blomefield includes a record of the considerable expenditure outlaid for the funeral. £20 in gold was changed into small donations to be given to the poor. It took three days to kill all the pigs, cows and other animals which were cooked for the wake at the priory. Numerous priests and friars walked with the hearse, which in itself was a considerable expense. Vast quantities of candles were burned, to the extent that glaziers had to be hired to take out two windows of the priory church, to let out the smoke and smell.

John Paston would not rest there in peace for ever. At the time of the suppression of Bromholm, his body was removed and reburied at St Margaret's church at Paston.

The Suppression of the Monasteries

The community at Bromholm continued until 1536, when Henry VIII and his chief minister Thomas Cromwell seized all such monasteries with an annual income of under £200, taking their land and selling it to others. The buildings of the priory gradually fell into a ruinous state, aided as was the case with many such buildings, by those who quarried them for their valuable stone. Doubtless there are many building in the locality which have Bromholm stone amongst their structure.

The Victorian County History of Norfolk, 1906