John Fenn and his Archives 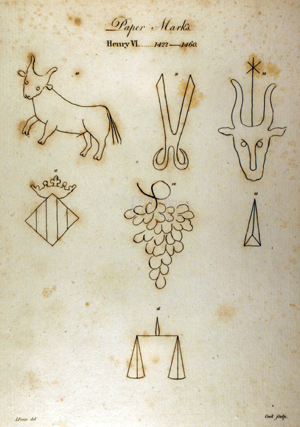 Watermarks from paper used by the Pastons, reproduced in the Fenn editionThe bulk of the Paston letters and papers were found about 1735 by antiquary Francis Blomefield in the muniment room at Oxnead Hall, which had been the main seat of the Paston family since the 1480s. Blomefield's father-in-law, Lawrence Womack, was the rector of Oxnead. William Paston, 2nd Earl of Yarmouth, the last representative of the family, had died in 1732, and the buildings quickly fell into disrepair.
Some of the letters came into the possession of antiquary Peter Le Neve and, according to John Fenn's introduction to the letters, on Le Neve's death in 1729 they came into the possession of Thomas Martin of Palgrave, who had married his widow; and upon Martin's death in 1771 they were purchased by John Worth, a chemist at Diss, whose executors sold them three years later to Fenn of East Dereham.

John Fenn was an antiquary. He saw his chance to add something new to contemporary understanding of 15th century England. As he says: "The sufferings of warriors, the distresses of private life, occasioned by so tempestuous a season, and the concise rapidity of the narratives, will present a truer picture of that turbulent period than could be exhibited by the artful pencil of a sedate historian."

He therefore proceeded to produce and publish an edition of the letters. His work was careful, well researched and was to inspire scholars not only of social and political history but of the history of the development of English as a language, the development of watermarks and paper production and of calligraphy.

He remarked in his introduction: "A faithful delineation of our language, during a period of almost half a century, in an age too, famous for little besides its barbarity and civil dissensions, is a matter not only of much curiosity but of some use." He concentrated on letters relating to the court and to the political life of the period because he felt that only the history of great events and noble people would be of interest to his audience. But later generations find the thoughts and reflections on the everyday lives of the Pastons and their neighbours a window into an extraordinary time - made understandable by the very ordinary emotions and reactions recorded in the letters.

The first edition of the letters sold out in a week, Fenn gave copies to carefully selected members of the great and good, including Boswell and Johnson, and of course, the king, to whom he dedicated his work. He was rewarded with a knighthood. Norfolk Record Office has a file of some of the letters written to Fenn in response to publication. To us, some of the reactions seems overstated and extraordinary ("They cause me to forget to eat or sleep..." W. Hutton) but we forget that since their discovery, the letters have been a major research source for historians of the period and have thus informed much of our reading of the time.

A part of the bill for the production of Fenn's edition of the lettersFenn's autobiography will take you to scans of the pages of John Fenn's own story.

Fenn's diary of 1786 is his personal records from that year - daily events and income and expenditure. We will be adding five more years of diaries in due course.
Some of letters as printed by Fenn can be seen within the data for each of the documents in the Paston Letters part of this site. In addition to the letters, Fenn includes a variety of images, a preface which can be downloaded here

Fenn_vol 1_preface.pdf - 7Mb and a number of other sections of information which we will add to the site. As you will see from his inscription, Fenn signed this copy and donated it to the Head Teacher of his former school at Scarning. The pages we show here are from the volumes presented in 1950 by the Norfolk historian R W Ketton-Cremer to the Paston School in North Walsham. At that time he was a governor of the school. This section is the opening of Volume I of Fenn's five volumes. As will be seen from Ketton-Cremer's opening notes, it was not the first time this particular volume had been presented. The download is provided courtesy of the Paston Foundation, which continues to operate as the successor to Sir William's (1528 -1610) original endowment for the school and its properties.