The Medieval churches of Norwich 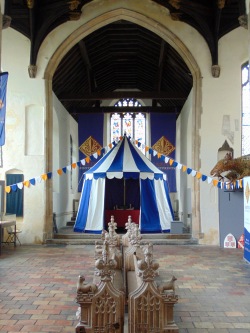 St Peter, Hungate, again ready to remember the Pastons. Footprints exhibition, 2018.Norwich had around 60 parish churches in the late Middle Ages, and members of the Paston family saw about 20 of them declared redundant and demolished in the 1550s. These were mostly smaller, poorly-endowed churches, the majority of which were along Magdalen Street and King Street. But they had also seen many of the others rebuilt, and indeed were behind the rebuilding of one of them themselves: St Peter Hungate. They rebuilt the nave, with transepts, in 1460, leaving the earlier tower and chancel. Their connexion with the parish began in when they bought a house on Elm Hill.

The Pastons acquired the advowson (the right to present the Rector) in 1458, when they bought it from the College of St Mary-in-the-Field (which stood where the Assembly House now is), and they continued to present the Rectors until 1603, when they seem to have allowed the right to lapse. We do not know how they acquired it, as religious bodies like St Mary’s College were usually more interested in acquiring advowsons than disposing of them – they formed a significant part of their income. But the parishes either side of St Peter’s, St George Tombland and St Andrew, also belonged to the College. It has the smallest parish by area of any of the Norwich churches (about three acres), and about half of that was lost to the Blackfriars’ convent between about 1327 and 1538: the parish boundary between St Peter and St Andrew still runs between Blackfriars Hall (in St Peter’s parish) and St Andrews’s Hall (in St Andrew’s).

Even if everyone attended

We have no idea why Norwich has so many churches: all we can say is that towns that grew up at the same time (around the eleventh century) also have a large number of churches – London had 126, Lincoln 47, York 45, Exeter 29, and even Thetford had 22.

Almost all the surviving Norwich churches were rebuilt in the fourteenth and fifteenth centuries, in the ‘Decorated’ and ‘Perpendicular’ styles of gothic architecture, owing to the financial prosperity of the parishioners; only St Julian and St Etheldreda of the standing churches were not rebuilt at this time, though even they had new windows and other alterations. (Of course, we know almost nothing about those demolished in the 1550s.) They range from the very large and imposing, such as St Peter Mancroft, St Andrew, and St Stephen, to the very small, such as St Julian and St Swithin. 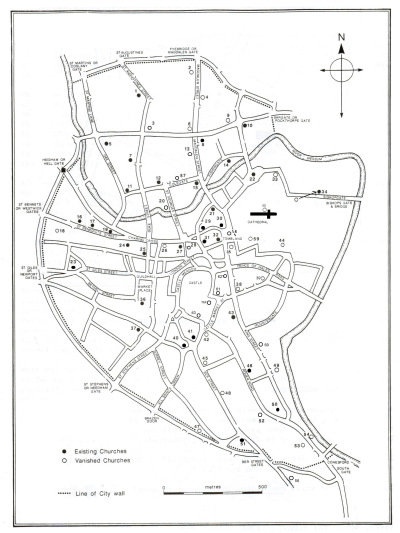 Churches that were standing in 1458, when John Paston became patron of Hungate, with those that were closed and demolished in the 1550s marked. (Map © Phillip Judge)

Some were rebuilt according to an overall plan, while others simply added aisles, chapels, and transepts almost at random, ending up with quirky floor-plans, such as St Michael-at-Plea or St Miles Coslany. This had nothing to do with increasing population – even in their original forms, the churches had more space than was needed for the whole parish – but to do with the liturgy: space for processions, extra altars in honour of specific saints, and so forth. So even if everyone attended on a Sunday (which we know from documents was not the case), there was room to spare. After the Reformation, it was decided that there were indeed far too many churches, and about twenty of them were closed and demolished, and the sites sold. The rest were reordered internally to accord with the new style of services in the Book of Common Prayer. They were all reordered again in the later nineteenth-century in line with what was thought to be their medieval appearance, though this was as much invention as reconstruction.

One, St Peter Southgate, was closed and demolished in 1884, and another three, St Michael-at-Thorn, St Benedict, and St Paul, were lost to bombs in 1942. St Julian was also hit, but was rebuilt in 1958 owing to its connexion with Dame Julian.

In 1970, an examination of the number of churches needed for worship resulted in closing of all but nine of them. Fortunately, the 22 redundant ones escaped the fate of the 1550s, and remain in other uses: eighteen are under the care of the Norwich Historic Churches Trust, three under the Churches Conservation Trust and one, St Mary-the-Less, is privately owned. Norwich Medieval Churches is a further project involving research in association with UEA.

61-64: Anglo-Saxon churches of unknown dedications, lost in 1067 when the Castle was built.

We are very grateful to Dr Nick Groves of the Norwich Historic Churches Trust for contributing this page.

Groves, Nicholas, The Medieval Churches of the City of Norwich, Norwich HEART, 2010