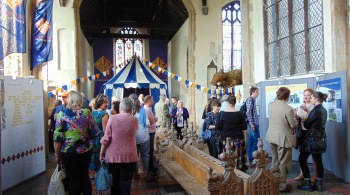 The launch event for the Hungate exhibitionThe exhibition at St Peter Hungate Church in Norwich was a launch activity for the Footprints project as well as the main 600th commemoration of the writing of the first Paston Letter in 1418. It ran from Saturday 26th May to 1st December 2018.

It was particularly appropriate that the exhibition and events should be at St Peter's. The church was the Paston's church in Norwich and was largely rebuilt by them in the 15th century. For a while they had a house nearby in Elm Hill. When John Paston I's body was brought from London, the hearse and the considerable cortège rested overnight at the church before making their way onwards to Bromholm Priory.

The exhibition was designed around static displays with a programme of activities throughout the year. 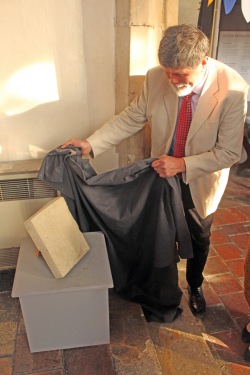 Dr Rob Knee, Chairman of the Paston Heritage Society, opens the exhibitonThe displays told the story of the main characters of the Paston Family and the Paston Letters, including the impact that both have had on Norfolk. The main areas of focus of the Footprints Project was also explained. Display boards were positioned on either side of the nave with a medieval pavilion occupying the chancel.

Project partners and other local supporters were invited to the exhibition opening on 26th May. A carved facsimile of the stone recording the re building of the church, presumed to have been positioned outside the North Door by John and Margaret Paston in the 1460s, was unveiled. 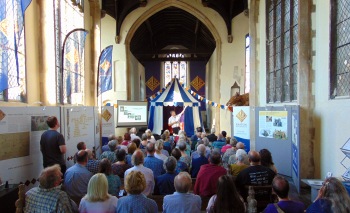 Attendances for the talks were very encouragingA monthly programme of talks, held in the church, ran from June through to October. Topics included were Sir John Paston II and his ‘Grete Boke’, The Paston Letters and the Wars of the Roses, The Pastons and Norwich Churches and the Paston Collection of a ‘Cabinet of Wonders’.

On June 28th drama students from Paston College in North Walsham performed ‘A Life Through Letters: The Paston Family’, a short performance piece the students themselves had devised. In July a creative writing workshop was held and Hexachordia, an early music trio, performed a concert of Tudor music on a range of contemporary instruments. 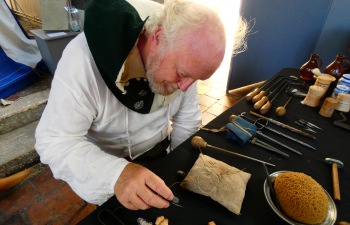 Dr Holly Maples and associates performed a number of drama pieces in the Norwich Castle Museum and Gallery as an accompaniment to the launch there of the International Paston Treasure exhibition which opened there in June. Both the exhibitions at St Peter Hungate and the Norwich Castle Gallery were linked by a collaborative approach that had seen representatives of the Footprints Project help with research and provide inputs to the Norwich Castle programme of events. The Norwich Castle’s Exhibition panel of researchers, which included their main partners, The University of Yale, were accompanied on a tour of Paston sites in North Norfolk by members of the Footprints Project.

In August, Dave Tonge held a story telling session for younger audiences. In September, Black Knight Historical, professional re-enactors, brought to life the exploits of John Paston III, veteran of the Siege of Caister Castle in 1469 and the Battle of Barnet in 1471. The following week-end saw a demonstration, for all ages, of siege engines and siege craft. 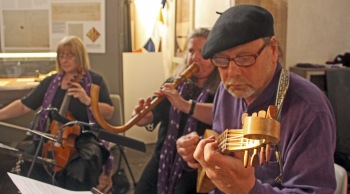 Medieval music with HexachordiaThe commemorations were drawn to a close by an exhibition of photography by Nick Stone, ‘Vanishing Points’. The themes of Nick’s work were portraits remembering the old boys of Paston School who had given their lives in the First World War, backdropped by haunting images of northern France.

The Hungate Exhibition was a success on many levels. It helped put the Paston Family back on the Norwich map. Attendance at the monthly talks was excellent. All the other events attracted good audiences. The aim of dovetailing the Hungate Exhibition with the exhibition at the Norwich Castle, which explored ‘The Paston Treasure’ painting, was particularly effective, so much so that a ‘What’s On’ sign was seen at Norwich Railway Station advertising the Paston Footprints event at the Norwich Castle!