Norwich as a Hub

Throughout the Paston Footprints Project, there have been many elements based in Norwich, not least because the Pastons had so many associations with the city. The Paston homes in Elm Hill and King Street, their contribution to St Andrew's Hall and their link with the Guild of St George are all part of the story. 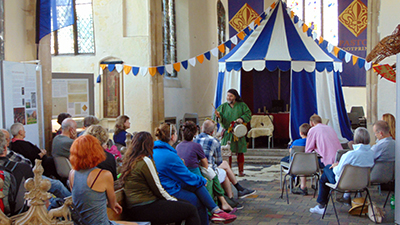 Storytelling at the Hungate exhibitionMany of the events were centred on an exhibition at St Peter's CHurch, Hungate through 2018. Not only were there information panels and associated artefacts, there was a series of lectures, theatrical performances and video presentations. A touch screen enabled the viewing of four videos, made to tell parts of the medieval story. A storyteller looked in to tell tales from those times, and the Norwich Medieval Society put on a full range of re-enactments linked to early Paston days. An exhibition was also hosted in the Forum.

An evening meal at the Maids Head Hotel, itself mentioned in a letter of 1472, attracted a full house, and other lectures were given in costume at the Maids Head, with other tours which started and ended at the historic hotel. Members of the Paston Heritage Society have led walks, a leaflet has been produced, and a walks and poetry book is on sale in bookshops in town. 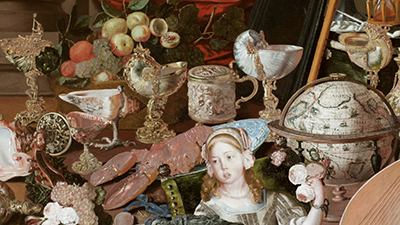 An extract from the Paston Treasure paintingA major exhibition took place at Yale University and then at Norwich Castle Museum, centred on the Paston Treasure painting. Our audience and branding research was consulted in their activity programme development, cross-promoted activities took place under the Footprints banner, including liaison in respect of some of the exhibits. The exhibition provided a magnificent setting for a newly commissioned Paston drama, led by Dr Holly Maples and Dr Karen Smyth.

It was particularly exciting for members of the Paston Heritage Society to be able to act as hosts when representatives of the University of East Anglia and of the Yale Center for British Art visited Paston sites, North Walsham and the tomb of Sir William in particular.

A significant academic publication of 590 pages The Paston Treasure: Microcosm of the Known World was produced by Yale University Press in association with the exhibition.

Norwich in the Letters 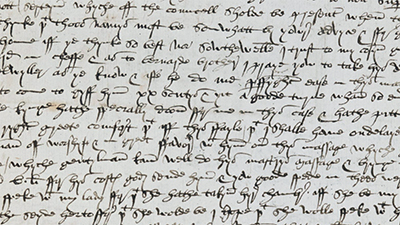 An extract from the letter referring to the 'Maydes Hedde' inn.A quick search of the full range of over 1600 letters produces a myriad of references to the city of Norwich and its population and its officers. To date we have identified 15 different spellings of the name of the city, and mentions from 1430 to 1631, with quite a few more letters yet to index! The earliest is the letter of Judge William Paston to the Vicar of the Abbot of Clugny about problems at the Priory of Bromholm, written in Norwich in April 1430.

Several generations of Pastons later Robert, Viscount Yarmouth, is writing in one of his many letters to his wife Rebecca, includes mention of a meeting to take place in the city of several men of influence to do some 'fixing' of arrangements in the context of forthcoming elections for Parliament, with slightly ominous overtones.

There are two powerful search facilities available on this site. Within the Paston Footprints project it is possible to use the letter search facilities to find references to places and people. Behind the scenes our volunteers have undertaken a substantial task in cross-referencing the many and various spellings of place names and personal names, to enable you to carry out searches. You can also search for places by use of the map search page and following the instructions there. 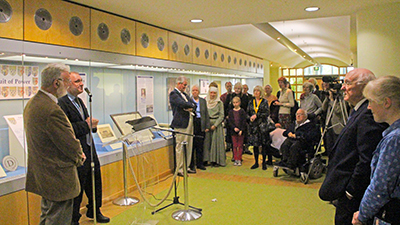 The opening of the first NRO exhibitionNorfolk Record Office has been an integral part of the Footprints project. At the outset a comprehensive exhibition of Paston documents and artefacts were on show in the gallery, and for the autumn 2021 the 'Finding Paston Footprints' immersive exhibition was based around the many activities of Footprints. This is supported by a series talks by academics and creative practitioners, and workshops based on the Paston Family, from August through to October. The NRO and UEA have also created a lasting legacy for enabling access to early archives in the form of two training videos hosted by NRO archivists. The first introduces people to palaeography of the late 16th to early 18th centuries, while the second explores title deeds and other forms of records. See highlights here.

Behind the scenes, NRO has provided all its known documents direct from the Pastons and around the Paston story for use on this site. Splendid documents, such as the (Paston Book of Arms,www.thisispaston.co.uk/pastonbookarms.html), can be viewed on this site, as well as many of the original Letters from the later period.

Another search facility which is under development at is that of taxonomic or subject based searching. The structure has been set up with the advice of the Record Office and will support the long-term cataloguing of letters in the archives. 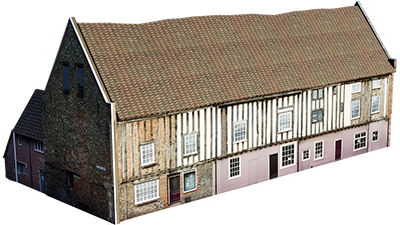 Robert Toppes' house and warehouse, as modelled by Virtual PastWe're pleased to have been able to incorporate within this part of the presentation, and at several other points, detailed 3D models produced as part of an earlier project, Virtual Past, from the University of East Anglia.

Some with a specialist knowledge of the history of Norwich have helped with contributions. In medieval times the city had many parishes, with church buildings often close to each other. One such was Hungate Church, where the Pastons assisted with the re-roofing and restoration of the building. Nicholas Groves contributes a page on the Medieval churches of Norwich.

The Paston sites around the city are represented in our suggested walk. It is very different from the other walks, which are generally rural in nature, and does mean great care is needed among urban traffic. However, Norwich is a pedestrian-friendly city, and most of the walk is within the central area.

If you can't get out and about yourself, you can also follow the walks and listen to the podcasts on-screen from this web site or from the Paston Footprints web site. 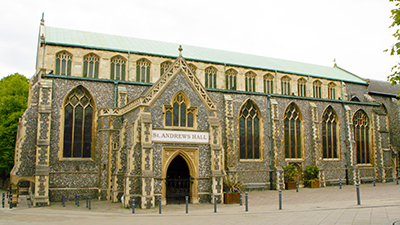 St Andrew's Hall, once the church of the great Dominican friary and purchased by the city in 1540, at the time of the dissolution of the monasteries. Now called (with Blackfriars Hall) The Halls.For each of the Footprints hubs, we've established a trail and activities – the former for adventurous walkers, the latter for families to explore more locally. With the help of Norfolk County Council, these are now well-marked trails; look for the blue markers with the griffin logo. You'll also find a printed map, or you can follow a map available online.

Later in 2021 you'll be able to access a Phone App to act as a guide as you walk and supply a podcast for various locations. There's a web-based version of the Phone App, and in due course there will be a version available from the Google App store and the iPhone App store.

In 2021, the History Hunters and Heritage Youth Collective at the Norwich Heritage Centre produced for us six 'blue plaques' to help write Paston women back into history. The young people were led in a workshop by Dr Smyth, engaged in further research via the 'Rebel Paston Women' section of the pastonfootprints.co.uk website (where biographies and creative re-imaginings of Paston women have been developed as part of a major social media campaign, and there are ongoing opportunities to take part). Then Rosie's Plaques teamed with us to hold a creative day with the young people at St Peter's Hungate. Much fun was had making the plaques. (Rosie’s Plaques is an art project staged by The Common Lot. They aim to address the fact of the 4500 heritage plaques in the UK, less than 12% celebrate the lives of women.) We are delighted to contribute to this enterprise and the Paston women plaques were revealed by costumed actors on Norfolk Day in the city. The plaques are now finding homes in locations in the city and on the countryside Paston walks.