These are the
Pastons

Captain Robert Paston was a naval officer, the son of Colonel Thomas Paston and the grandson of the 1st Earl of Yarmouth. He was placed in command of the 5th rate 36-gun British frigate HMS Feversham while it was stationed in New York during the war between France and England for control of North America, including Canada. 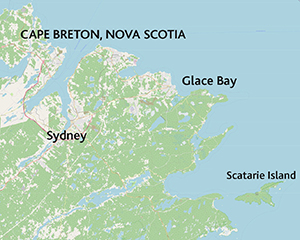 In 1711 HMS Feversham was ordered by Admiral Hovenden Walker to lead three other treasure-laden ships from New York and up the St Lawrence river, carrying a great deal of cash and equipment in an over-optimistic bid to take Fortress Quebec.

They reached Nova Scotia without incident in moderate weather, but a strong south-west wind was blowing. The Feversham adjusted its heading to take this into account and to round Cape Breton Island into the St Lawrence, but it seemed the wind changed slightly, and as a result of unexpectedly fierce tidal currents around Scatarie Island they found themselves drifting relentlessly on to rocks near the shore.

All four ships were lost, although many lives were saved, including 102 of the 148 on the Feversham. Sadly Captain Robert Paston - who was betrothed to Anne Hyde - did not survive, and with him went the Paston family as a whole, as neither his father nor his uncle, or any of their children, produced a male heir.

An 8 reale, a silver coin of 1684, in the reign of Charles, recovered from the Feversham

An attempt to salvage the ship failed, and for many years the wreck of HMS Feversham lay in shallow water, but it was discovered in the 1970s by Captain Robert MacKinnon, in charge of an archaeologically guided shipwreck recovery project backed initially by the federal government in Canada. In 1982 he returned for a closer look with all relevant permits and science teams in place. He found – as he expected – a great deal of treasure.

The story is told in Capt MacKinnon’s exciting book, Treasure Hunter - Diving for Gold on North America’s Death Coast. He told the Paston Heritage Society that “one of my main science divers has turned up a mountain of research material all pertinent to Captain Paston, Anne Hyde, his betrothed, and the fact the ship had considerable prize money due”.

He is currently working on a book which he says will “honour the ship, the captain and crew and tell of the over £5 million in gold reported lost with her and the three transports she accompanied”. The proposed title is Queen Anne’s Treasure.

Capt Paston's fiancee, Anne Hyde, who was only 18 at the time of his death, went on to marry George Clarke, the colonial governor of New York. Her family came originally from Cheshire, and she was the daughter and sole beneficiary of Edward Hyde, governor of North Carolina – after whom the town of Hyde Park, New York, was named in 1810.

The Feversham wreck site is 20 miles from Louisbourg. The coast of Nova Scotia as a whole is possibly the most treacherous in the world, and it is estimated that more than 5000 ships have come to grief there. An exhibit about the wreck is on display at the Maritime Museum of the Atlantic in Halifax, Nova Scotia.

For more details on the story of the ship itself, clicking HMS Feversham will provide more information.