A page to take you through the process of the building of a model of Gresham Castle, one of the first manors purchased by Judge William Paston as he grew in influence and wealth. If you want to follow the story of this page from the beginning, start at the bottom and work up!

Gresham Castle reconstruction
4th May 2021
What Gresham Castle looked like at the time of the seizure of the castle from Margaret Paston by Lord Moleyns' men – in full 3D. You can spin and enlarge the image as you wish; you'll realise that the still images below are created by extracting frames from this model and then a bit more digital artwork.

The models are hosted on the SketchFab web site and make use of its possibilities. As the technology advances, more options become available – if you'd like to see it in stereo on your phone, you'll see that can now be done with a bit of extra kit.

Gresham Castle - the southerly aspect
29th April 2021
Description:
Mist rises around the castle in our view to the south. 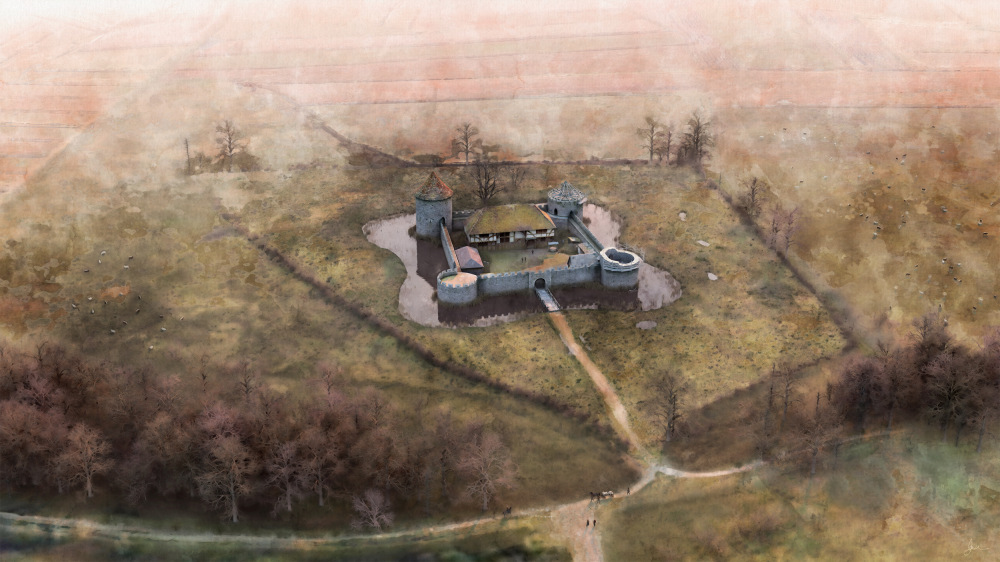 Gresham Castle and the village
29th April 2021
Description:
The view to the north again, but now a suggestion of the medieval village is in place. In the 21st century Gresham is split into two distinct settlement areas, one with the name 'Lower Gresham', but we would suggest that there was settlement around the church and down towards the castle - possibly some settlement nearer to the castle itself. Perhaps archaeologists of the future will be able to tell us more. 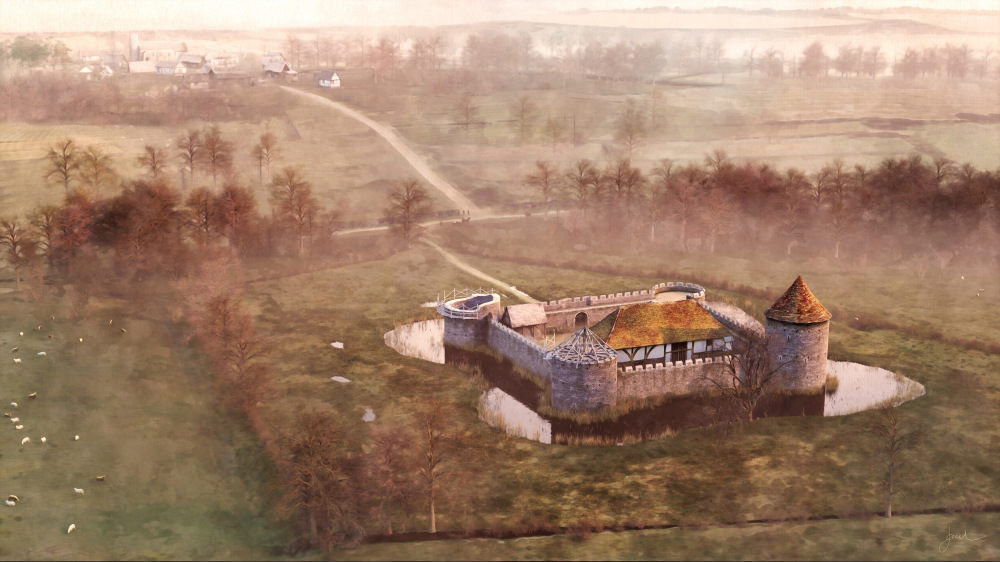 Gresham Castle and manor house
14th April 2021
Description:
A completed image of the castle in its context, this time looking south. Through lack of evidence this is the most speculative of the four Paston buildings we've been creating, but the positioning and size are based firmly on the 21st century remains. 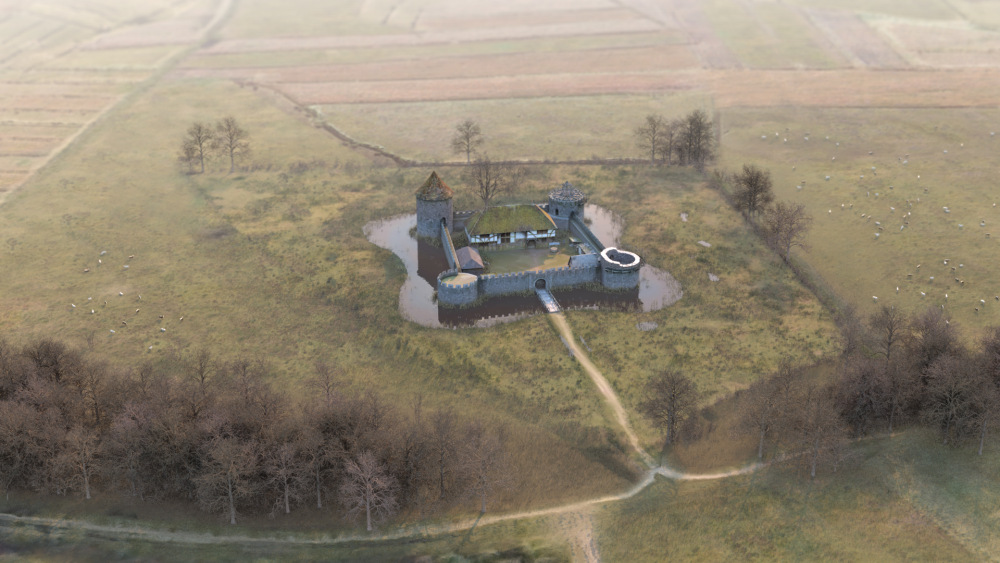 Gresham Castle and church
14th April 2021
Description: Time for some context. Here's a view looking north; in the distance is Gresham Church. We have no specific information on the whereabouts of houses in the village, but doubtless there were several in this area. 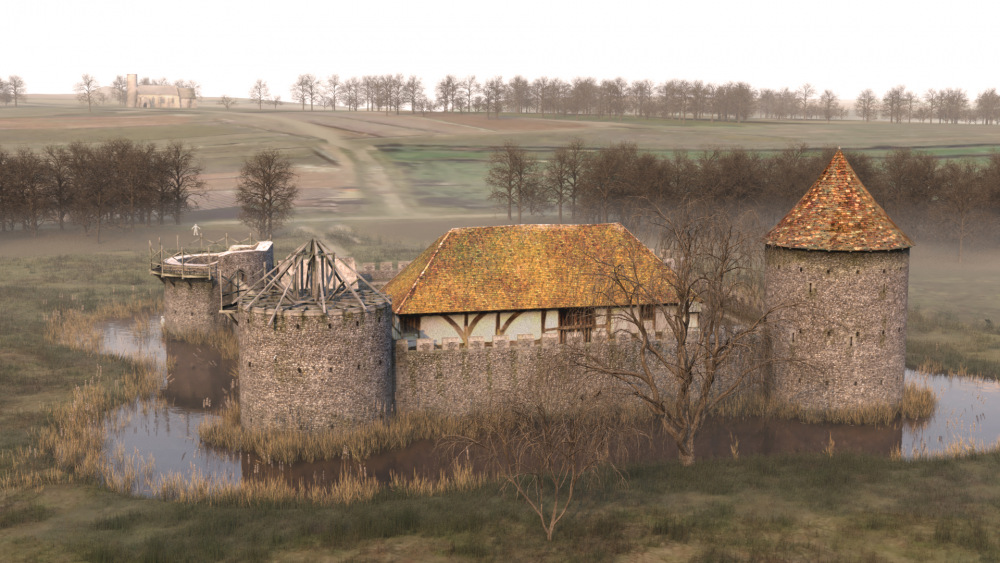 Gresham Castle - building the walls
12th April 2021
Description:
The castle walls go up around the manor house. One question is: Did Sir Edmund Bacon, who owned the first manor house, ever complete the building of the walls? Our artist has decided the best option is to show the building in progress. 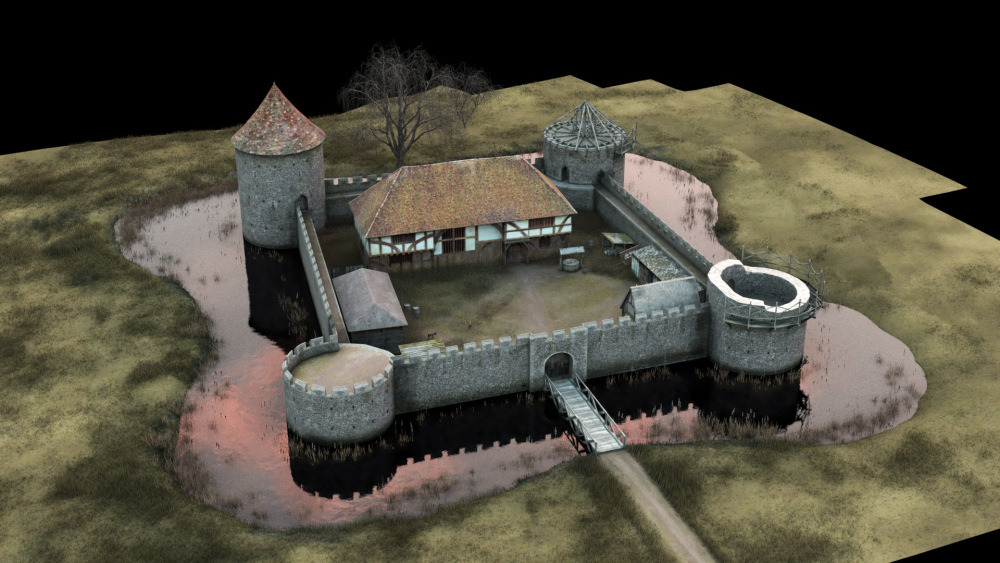 A manor house
15th March 2021
Description:
Research into the structure of the castle at Gresham suggests that there was a manor house within the walls of the castle. With the moat still existing, and a look at extant comparable buildings, we can make reasoned judgements on comparative sizes, and the model-building is well under way. 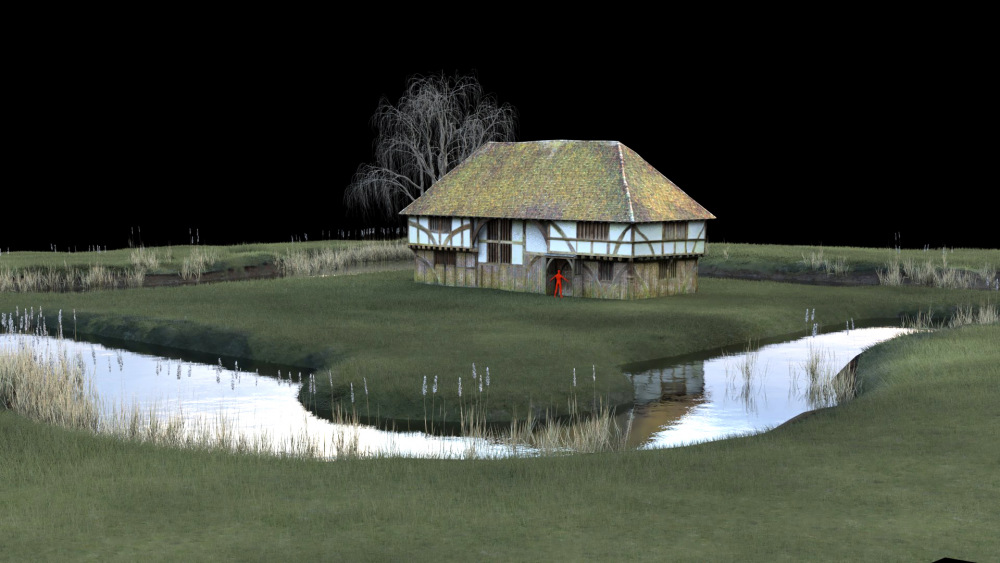 Gresham Castle was another of the buildings owned by the Pastons. Today it remains an isolated site in the middle of a field at Gresham. It is normally inaccessible, as it is on private land and generally has a crop growing around it. We built a 3D model of it in 2020.
Description:

We picked a good day on 7th February to be at Gresham to undertake the drone photography of the site. We waited an hour or so for the dampness on the foliage to fade and for the sun to be a little higher in the sky; in one respect a mid-June day would be best for the lighting, but we wanted the vegetation to be as sparse as possible, which required a winter visit. The following two weekends brought strong gales across England; so we were fortunate to have got the job done when we did.

Part of the village of Gresham can be seen, with the white building being the former pub, the Chequers. It is thought that the stream supplying the water for the moat flowed from near the Chequers towards the castle; we are considering a simple trench to try and establish whether this is a correct interpretation.

Even in the winter the vegetation is considerable and obscures the walls and the moat. The current LIDAR scan of the site shows the walls and the round towers very clearly; so with a combination of the various images and maps we can be accurate about the location and overall size.

At the beginning of February our team was at Gresham undertaking drone photography of the castle site as part of the preparation for building a model of the castle later in the year. While they were there, we took the chance to photograph All Saints, Gresham, for a 3D model.

It proved a tricky day, with strong sun from the south and a deep shade on the north side of the church. The automatic processes of the photogrammetric software couldn't quite handle it - and the trees very close to the church didn't help - so we were obliged to use another part of the program to bring the elements together. However, this did not quite work as smoothly as we hoped, so at some point we'll work through the 400 or so photos again to see if we can improve on what you see here. But it takes a bit of time!

We'll be hoping to find out more about the relationship between the church and the Pastons. The building is described as All Saints' Church and in Pevsner/Wilson I on page 529 it's interpreted as a late 11th century church with the round tower added in the 12th century. An added fascination is the flint axehead, thought to be mesolithic, discovered in the building material of the tower in 1886.

Model update:
8th June 2017
Description:
As part of the Footprints 600 project, Paston Heritage Society is working with pupils of the village school at Gresham to explore the story of how Margaret Paston was ejected from her home in Gresham Castle.

A view of the castle from the road. The flint walls are nearly down to the general field level, and the moat continues to surround the site. 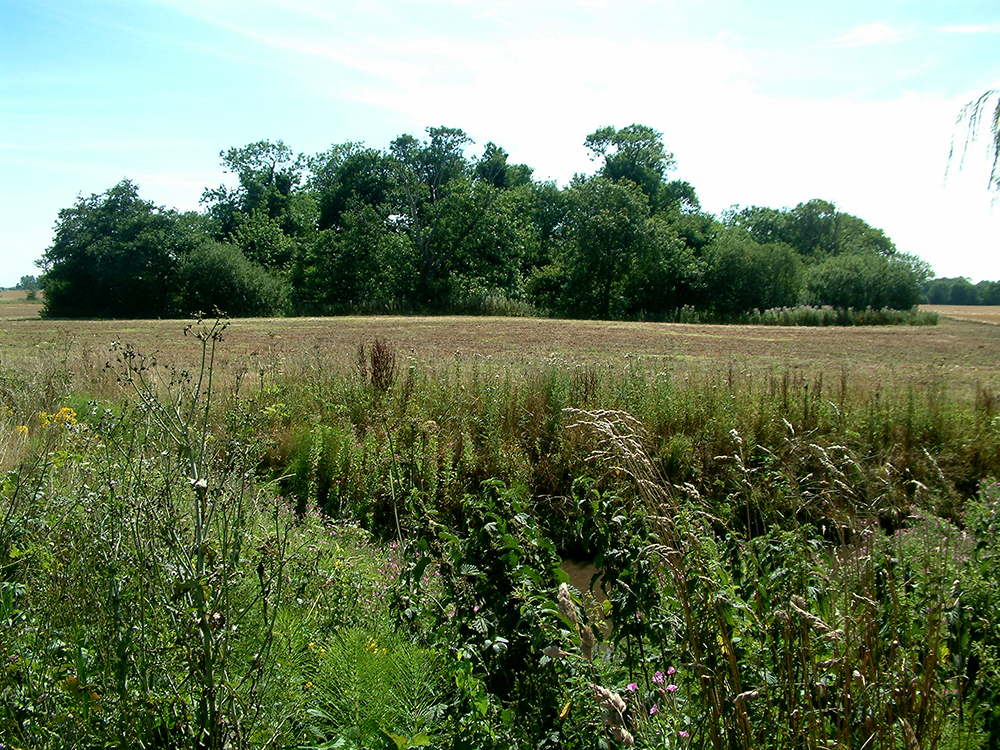 Gresham Castle from the road 2006