One of the joys of today's Norwich is the number of buildings that survive from the late medieval period, in spite of modern development and the damage caused by the Baedecker raids of the Second World War. Among the buildings are those that can be linked directly to the Pastons and the Paston Letters. Some were lost in earlier times, such as their actual house in Elm Hill, burnt down in the great fire of March 1507. Today's plaque to the Pastons is on a house built on the site about 30 years later by Augustine Steward, who was mayor of Norwich three times.

The Governance of the City

One of the buildings that the Pastons would have known is now the Bridewell Museum, probably built by the father of William Appleyard, the first mayor of Norwich. Its scale is such that it indicates the growing prosperity of the city at the end of the 14th century and the burgeoning wealth and confidence of traders in the city. It was they who would dominate the governance of Norwich.

This "affluent elite" enabled the city to establish full self-governance through a mayor and aldermen in 1404.There had been earlier acquisitions, such as that of the Castle fee, previously a royal property, and the buying up of shop properties and market stalls. There was increasing control on the staithes where vessels loaded and unloaded their wares. The markets of Tombland and the current market site grew in importance. Harnessing the power of the river was attempted in the first years of the 15th century through the water mills at New Mills. 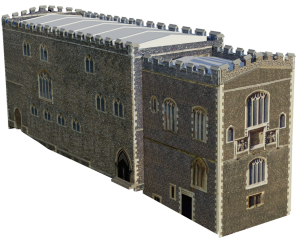 Norwich Guildhall 1500, from the UEA Virtual Past project.Doubtless Judge William Paston (1378-1444) watched with interest and played a part in the administration of justice, as the Guildhall was constructed on the site of a former tollhouse between 1407 and 1412. It was a major expense for the ruling fathers and remains with us, though somewhat affected by Victorian "restoration".

Not all was peaceful in the city. We have records in the Paston Letters of various affrays, both of personal enmity and of wider unrest. The shire reeve, the sheriff, the lawyers and judges were busy, as well as occasionally being at personal risk.

Norwich was a "major industrial city" before the 15th century and continued to be so. The Pastons were familiar with the comings and goings of trade; in spite of some contemporaries suggesting that the family were a group of upstarts, it seems likely that the 14th century Clement Paston was a successful businessman. Seizing chances offered by the vicissitudes of the Black Death, together with the opportunities of education and good marriages, the family moved up the scale. But they would have known the importance of successful trade.
Their own business was often in barley and malting; for Norwich much output was in the textile trade, at which their friend Robert Toppes excelled at his warehouse by the river Wensum. Alongside Toppes' properties were fullers, tanners and skinners. Worsted and developing kinds of wall hangings expanded the textile trade, and sheep play a significant part in the family Letters. Painted glass was important for religious buildings, civic buildings such as the Guildhall and for the homes of gentlemen. A home in the county and property in the city were important to the Pastons, Heydons, Berneys, Cokes, Hobarts and Erpinghams, together with the chance to display their importance through their properties.

We have some evidence of the Pastons’ involvement in sea-going coastal trade; Hugh Fastolf and then Sir John Fastolf owned trading fleets at Yarmouth, with John Paston inheriting their wealth. We are perhaps less clear on the extent of this trade from Norwich itself, though sea-going vessels could make their way direct to its quaysides. However the Hanseatic League, that great trading structure of the first half of the millennium, operated in the Norfolk ports of King’s Lynn (known as Bishop’s Lynn until 1537) and Great Yarmouth, and doubtless to some extent with Norwich. Events on the coast, coastal raiding and major incidents are reported in the Letters; for instance in May 1449 Robert Wenyngton gives his account of one of the major precursors to the Anglo-Hanseatic wars. Suffice to say that a route to peace was found, textile trade from England being so important.