Drayton Lodge, 2021Drayton Lodge is a fifteenth-century Grade II* listed building and Scheduled Monument. Located at the south-western extremity of the medieval manor of Drayton, it stands on a plateau overlooking the valley of the River Wensum, which lies to its south-west, but this is not obvious, as today the building is surrounded by trees. However, until the end of the eighteenth century, it stood prominently on open heathland, with a clear view towards the manor of Costessey, which lay in the valley below, and from which it could also be distinctly seen.

The building has been variously described as, a 'plaisance', a hunting lodge or a strategic lookout post, while, at one time, it was even considered to have been built as an eighteenth-century folly, an idea which was disproved in the 1840s.

However, the structure was probably originally conceived as a small fortified manor, one which was mainly decorative and not of great military strength, but which nevertheless did have some minor defensive capability and which could be garrisoned, if the need arose, as, indeed, it was, on occasion.

Drayton Lodge, 19th-century engraving, drawn and etched by Henry Ninham (1796-1872).The building, now somewhat decayed, is in the form of a small, rectangular tower house, internally measuring 6.9 m., east to west, and by 5.0 m., north to south, with a drum tower at each corner. The walls have a maximum height of approximately 6.0 m. Those on the north, east and south are, on average, 0.8 m thick, while that on the west side is broader, at 1.1 m.

The walls of the drum towers vary in thickness between 0.4 m. and 0.5 m., with the north-west tower being slightly smaller, both internally and externally, than the other three.

The building now stands to two storeys, but internal evidence suggests that it originally had a third storey. Internal features include traces of a large fireplace in the west wall and small patches of remaining plaster indicate that the building was rendered internally throughout. There is evidence of a garderobe in the north-west tower, while the south-west tower probably contained a staircase, possibly of wood. The original entrance was in the south wall. 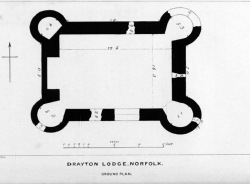 Plan of Drayton Lodge, 1849, from Henry Harrod, ‘On the Ruined Lodge at Drayton’, Norfolk Archaeology, 2 (1849).Drayton Lodge is mainly constructed of soft, pinkish bricks (which, seen from certain angles, have a yellowish tinge) in English bond. On average, the bricks measure 260 mm. x 120 mm. x 57 mm. (for the medieval craftsman, this would have been 10¼ ins x 4¾ ins x 2¼ ins). Analysis of them undertaken in 1998 showed that they were not made from clay, but from a mixture of brickearth and chalk, with a low clay mineral content. Their source has not yet been established, but they probably came from the close vicinity and certainly not from Caister, as some commentators have suggested.

There is evidence that the structure has been repaired on several occasions over the centuries, later patchings, mainly of dark red brick, being seen in places. The latest and most visible repairs were carried out in 2021, as part of the redevelopment of the nearby Drayton Old Lodge.

The building is an early example of the use of brick in England, contemporary with Sir John Fastolf's larger brick construction at Caister Castle.

Drayton Lodge was built by the famous Norfolk knight, Sir John Fastolf, KG, and was probably completed by 1437. Fastolf had acquired the manors of Hellesdon and Drayton from Richard Sellyng, Esquire in 1432 and, soon afterwards, constructed two logges there, one in Hellesdon and one in Drayton, of which only the latter survives, albeit as a ruin.

Fastolf, who had served with great distinction in the Hundred Years' War, subsequently invested much of his enormous wealth, gained from profits of war, in estates in England. However, some of his acquisitions lacked good title and, in later life, this involved him in numerous disputes, not least with the Duke of Suffolk, who was lord of the adjoining manor of Costessey and who, himself, entertained some claims to the manor of Drayton.

While Drayton Lodge may have been intended as a small, but impressive, occasional residence, pleasantly situated, there is no doubt that, to Fastolf's old soldier's eye, its topographical location, overlooking a rival's manor, the river and the road below, was a strategic one, suited either to a limited defensive purpose or, more likely, for display, as a visual deterrent to any possible threat from a potentially hostile neighbour.

After Fastolf's death in 1459, under the terms of his somewhat controversial will, the Lodge was acquired by the Paston family, who, in the absence of another prominent residence in Drayton, used it, variously, as a hunting lodge or as an occasional retreat where banquets were held, and as a local administrative seat, where manorial courts took place. 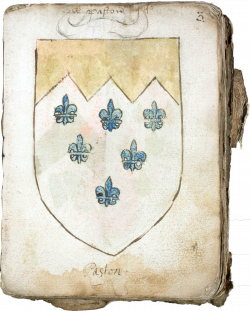 The Paston arms, from the Paston Book of Arms, formerly known as Friar Brackley’s Book of Arms, c. 1450 Norfolk Record Office, RYE 38, p. 73However, in April 1465, John de la Pole, Duke of Suffolk began to assert his claims to the Paston manors of Hellesdon and Drayton, using, first, legal means and then the threat of armed force. In May, with an attack seemingly imminent, the Pastons garrisoned Drayton Lodge, although nothing occurred until October of that year, when a large force of the Duke's armed retainers entered Hellesdon and Drayton and 'beat down' the Paston properties there. Drayton Lodge was left as a ruin, which the Pastons chose not to repair. Four years later, in June 1469, when Edward IV passed along the main road (now the A1067) from Norwich to Walsingham, he was shown the nearby lodge which had been damaged, but refused to offer any remedy.

Little is known about the Lodge's subsequent history, but it was possibly re-used as a shelter for warreners, gamekeepers or shepherds, a map of 1826 referring to it as 'Shepard's Castle in ruins'. By the eighteenth century, it had come to be regarded as a charming curiosity, wrongly believed by some to be a recently-built romantic folly.

The medieval Lodge's setting changed substantially after 1914, following the construction of the nearby Drayton Old Lodge. Built in the 'Arts and Crafts' style, originally as a private residence for Ernest Raikes, QC, who had also been a first-class cricketer in India, it was sold by auction in 1925 and became a nurses' home for the nearby Hellesdon Hospital. In the 1930s, an additional annexe was added, while the use of the buildings changed in the 1990s, to provide office and conference facilities. In 2020-1, Drayton Old Lodge was developed into a complex of luxury townhouses and apartments. 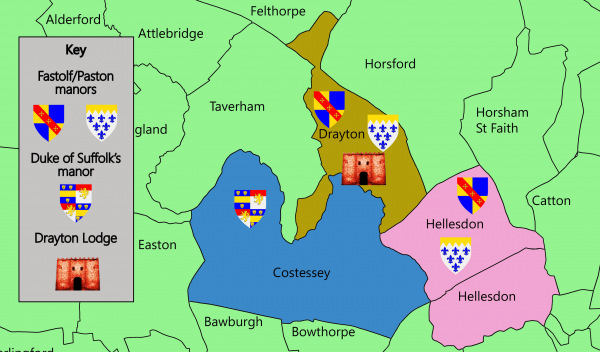 Map showing the strategic location of the lodge in relation to the manors of Drayton, Hellesdon and Costessey.

Sir John Fastolf, KG (1380-1459), the builder of Drayton Lodge, was a career soldier who made his fortune during the Hundred Years' War. His name was immortalized through William Shakespeare's character, Sir John Falstaff, although the real Fastolf bore little resemblance to the clownish, cowardly Falstaff of Shakespeare's plays. 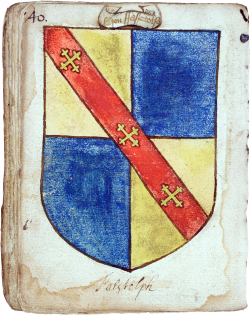 Sir John Fastolf’s arms, from the Paston Book of Arms, formerly known as Friar Brackley’s Book of Arms, c. 1450 Norfolk Record Office, RYE 38, p. 40Fastolf was born at Caister, into a minor Norfolk gentry family. As a young man, he served under Thomas, Duke of Clarence in Ireland in 1405-6, where, in 1409, he married Millicent daughter of Robert, Lord Tiptoft, and widow of Sir Stephen Scrope. Although childless, the marriage was a profitable one, bringing Fastolf lands worth £240 a year.

In 1412, Fastolf embarked upon a long military career in France. He served first in Aquitaine in 1412–13, as deputy constable of Bordeaux, then as captain of Soubise and Veyres in 1413-14.

In June 1415, he indented to serve as an esquire in the retinue of Michael de la Pole, Earl of Suffolk, with ten men-at-arms and thirty archers, on Henry V's Agincourt expedition. However, he did not fight at Agincourt, being invalided home after the siege of Harfleur. In 1416, he re-joined Harfleur's garrison, and was involved in repelling a French siege, also taking part in the nearby battle of Valmont.

Between 1417 and 1421, he served with the Dukes of Clarence and Exeter in Normandy where, in 1419, he was granted four lordships, the first of his many land acquisitions in France. It was during this period also that he was knighted.

In 1422, under the infant Henry VI, he was appointed the king's lieutenant and regent in Normandy, and governor of Anjou and Maine, while in 1424, he was elevated to the rank of knight banneret. At the battle of Verneuil, in the same year, he captured Jean, Duke of Alençon. Fastolf's energies led to the subjugation of Maine in 1425, and in 1426 he was installed as a Knight of the Garter.

At the 'Battle of the Herrings' near Rouvray in February 1429, he formed supply wagons carrying barrels of fish into a makeshift fortification to protect his troops from French attacks. However, in June of the same year, he suffered defeat by Joan of Arc at Patay, which led to an accusation of cowardice. The case against Fastolf dragged on into the 1440s, although he was eventually exonerated from all blame. 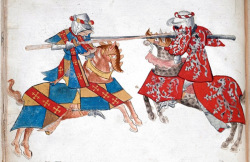 Sir John Fastolf (on left) jousting with Sir William Oldhall of Narford, from Sir Thomas Holmes’s Book of Arms, c. 1445-c. 1450 British Library, MS Harley 4205, fo. 36vFastolf retired from military service in about 1440 and returned to England. Since 1426, he had regularly been sending home massive sums of money – his war profits – which were largely invested in the purchase of lands, in Norfolk and elsewhere, enabling him to enjoy a lifestyle of great wealth and luxury. He took up residence variously in Southwark and East Anglia, and built Caister Castle, as well as Drayton Lodge. However, during the last twenty years of his life, he was embroiled in almost endless lawsuits, and the Paston Letters depict him in his later years as an irascible, litigious old man. On his death, his estates were inherited by the Pastons. 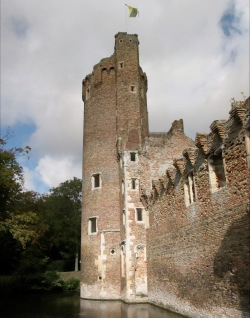