The various stages of building of Oxnead Hall are being investigated as part of the the Footprints project. Today the privately-owned standing buildings are the servants quarters of the last of Clement Paston's hall on the site. The layout of the hall is recorded in the layout of the paths and gardens of the present hall. Clement and his wife Alice Packington lie at rest in the church, close to the hall. Our 3D model of the site nears completion in January 2022.


January 2022
Here's a fly-round of Oxnead Hall from our drone video - with the Hall as it was in Stuart times back in place.

Model update:
December 2021
Oxnead Hall, church and gardens as we envisaged they looked at the time of the visit of King Charles II, in the 1670s.

Another view from the south side, with the 3D model being used to create a picture of the gardens as they might have been at the time of King Charles II's visit in the 1670s. 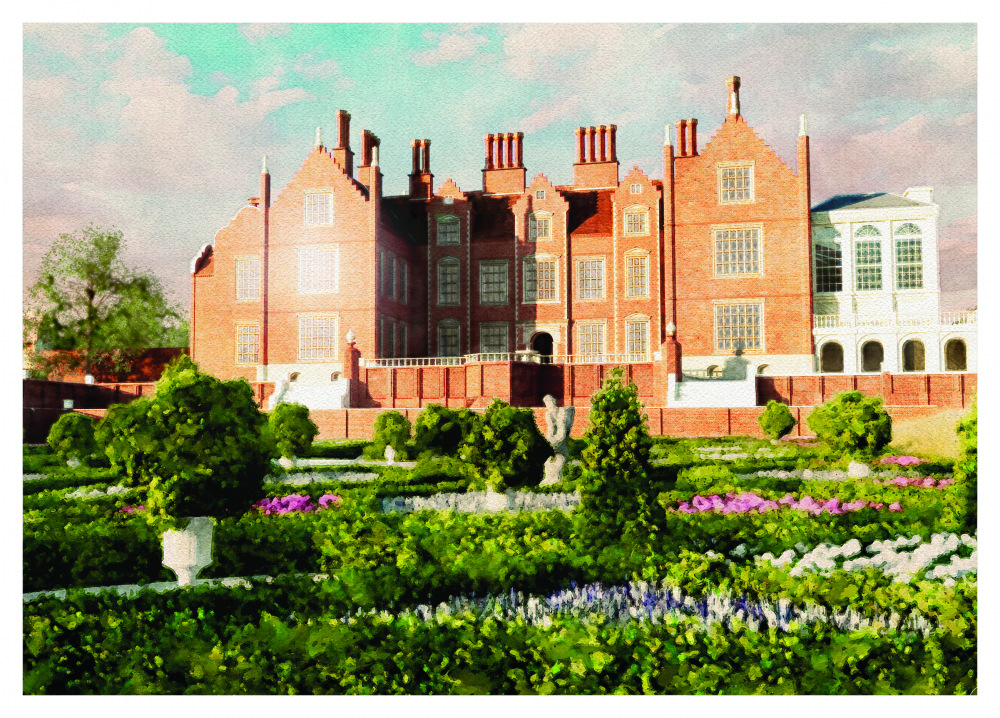 The south side - suggesting the gardens, November 2021
With the layout established, the colouring of the gardens can commence. Images from the 3D mdel can be used to create pictures around the house. 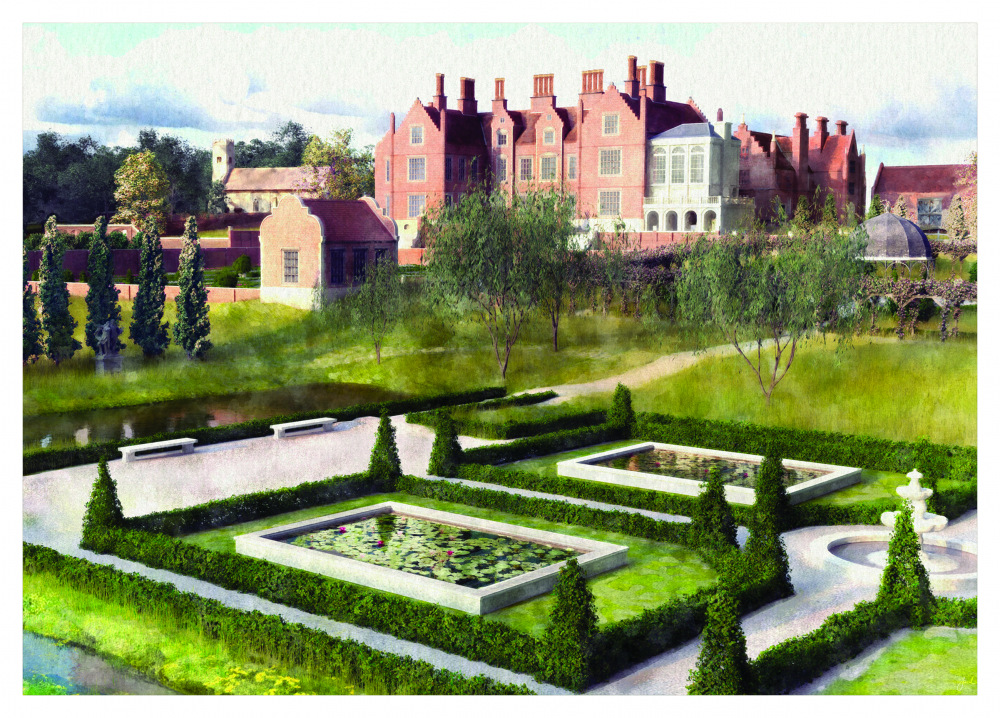 The south side - terraces to the river, July 2021
Moving round to the south side of the house, a start is made in laying out the gardens. It is felt that Repton's drawings are probably not as accurate as once thought and more reliance is put on the extant inventories of what could be seen in the gardens. Existing ground works give some certainty to how the terracing was laid out. 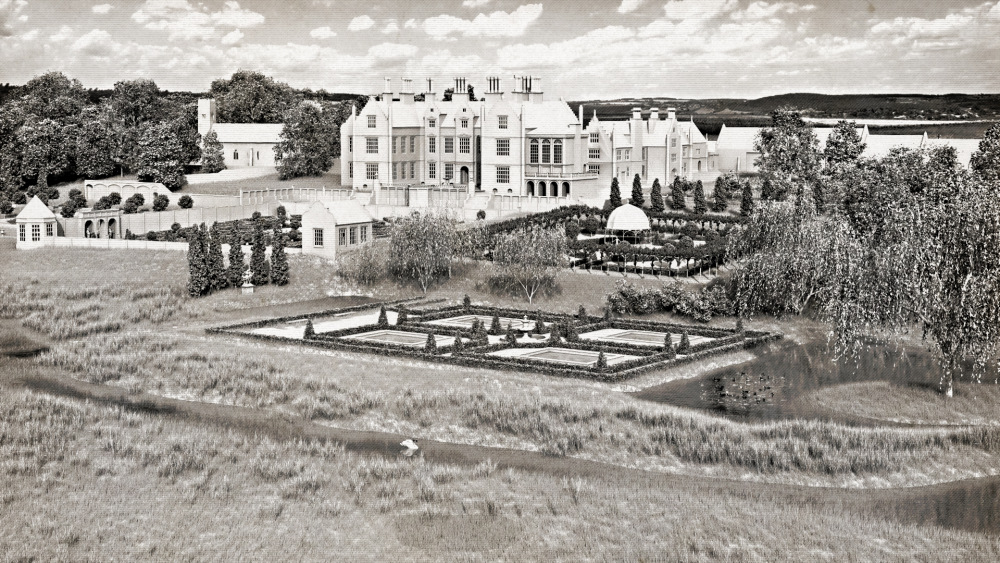 The Main House - the approach, April 2021
Staying on the north side of the house, with the north-east run developed to how we think in looked in Stuart times, we pick up on the suggested garden and wall layout. 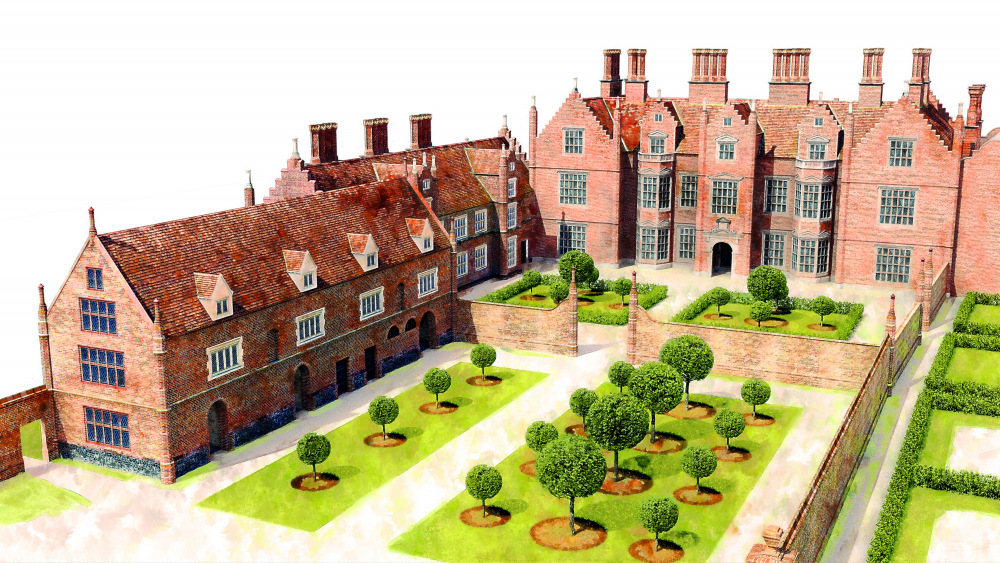 The Main House, January 2021
Earlier work was on the north wing but now the main house is taking shape. Repton was fussy about the look of the windows, so a bit of reworking was necessary there. With the help of a photographic journey to Barningham Hall, a contemporary building, and another site visit to Oxnead, we believe we're getting to an understanding of what the building looked like in its best days. We were able to make the visits on the last day before the November lock-ins for the east of England! Oxnead Hall - south side and north side. 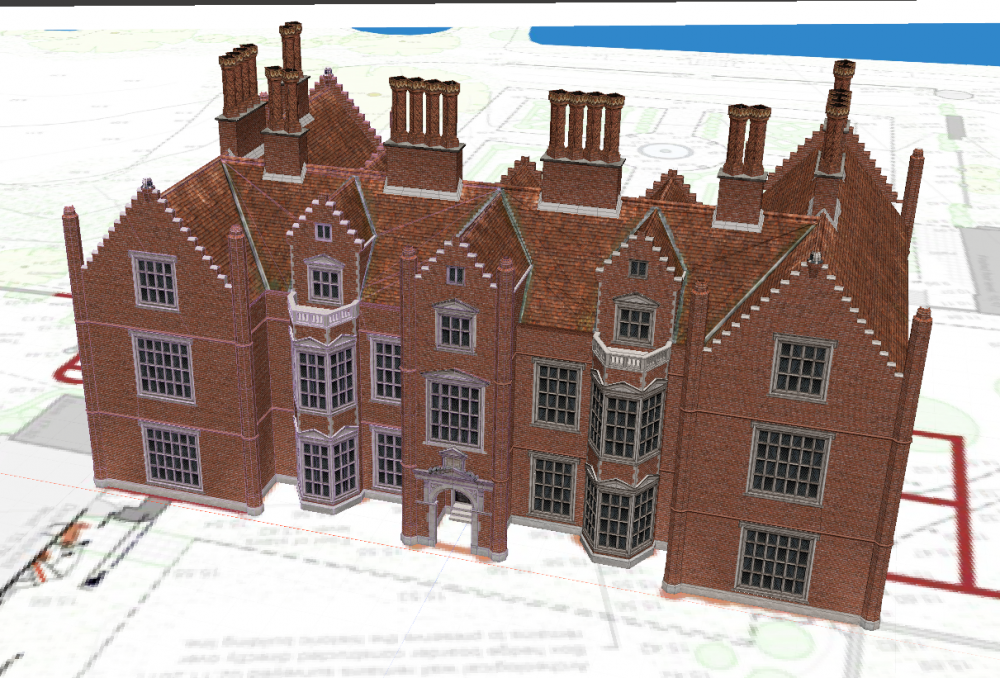 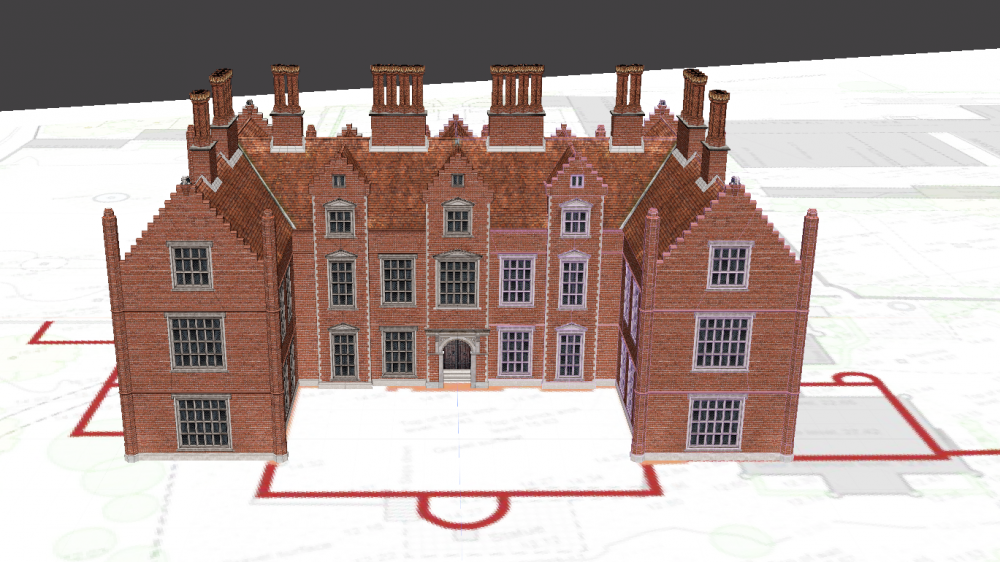 Model update:
John Adey Repton
Key sources for the building of the 3D model of Oxnead Hall are the lithographs based on the drawing of John Repton. Repton did not actually see this view for himself as he became responsible for the hall after it had deteriorated somewhat, but he was able to speak to those who could describe it to him in detail. There is some change of detail between this straight-on view and another angled view but they are our best sources for understanding the hall at the final form of its final development. 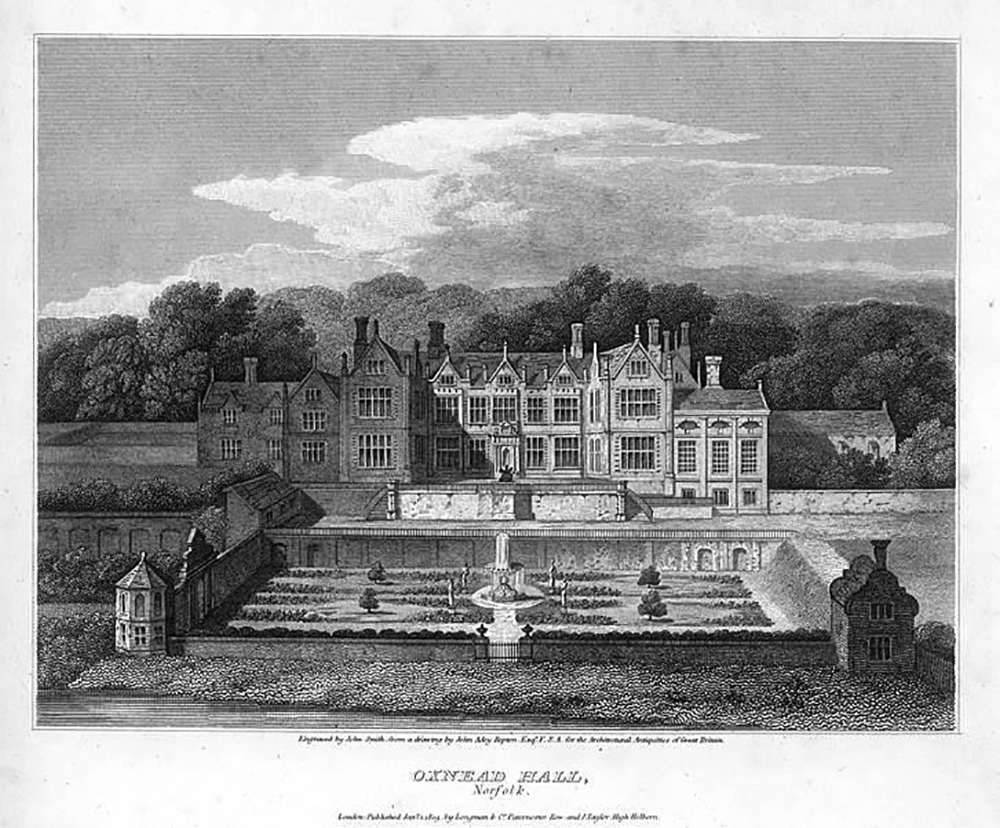 There is a glorious view of today's hall and its terraces from across the river, from the public footpath. 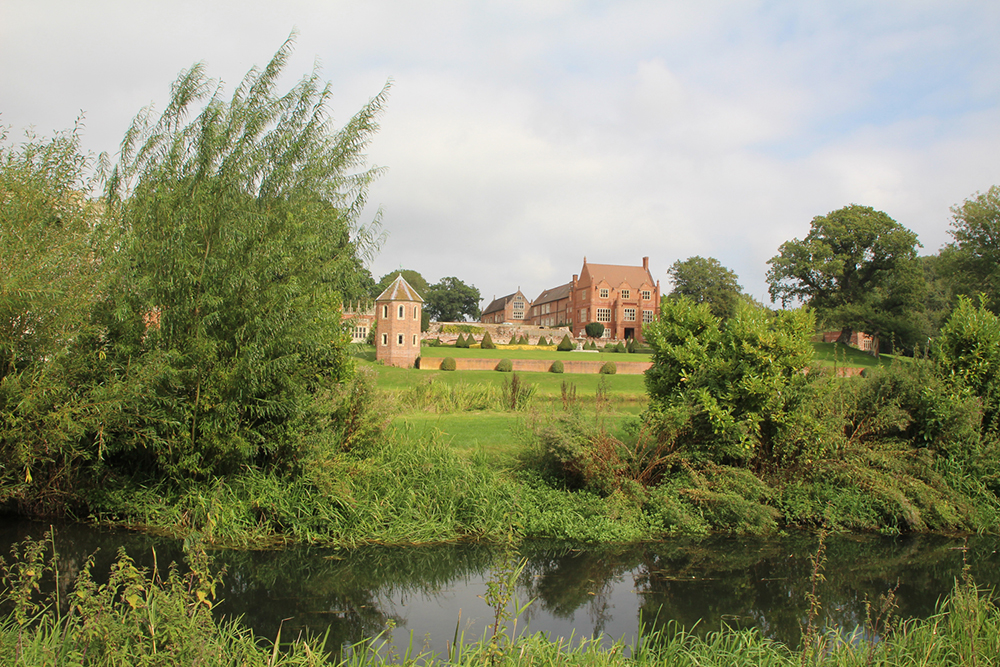 Oxnead Hall from across the river Bure

The series of drone photographs which circled the site have helped generate the photogrammetric model from which this still is taken. The model will be used when we can commence the building of the 3D model of the site.

On the right of the picture is the river Bure. The tower of the church is seen on the left hand side. Today's rectangular gardens follow the layout of the Tudor gardens; the main hall once stood on the ridge above those gardens with a southern aspect towards the river. 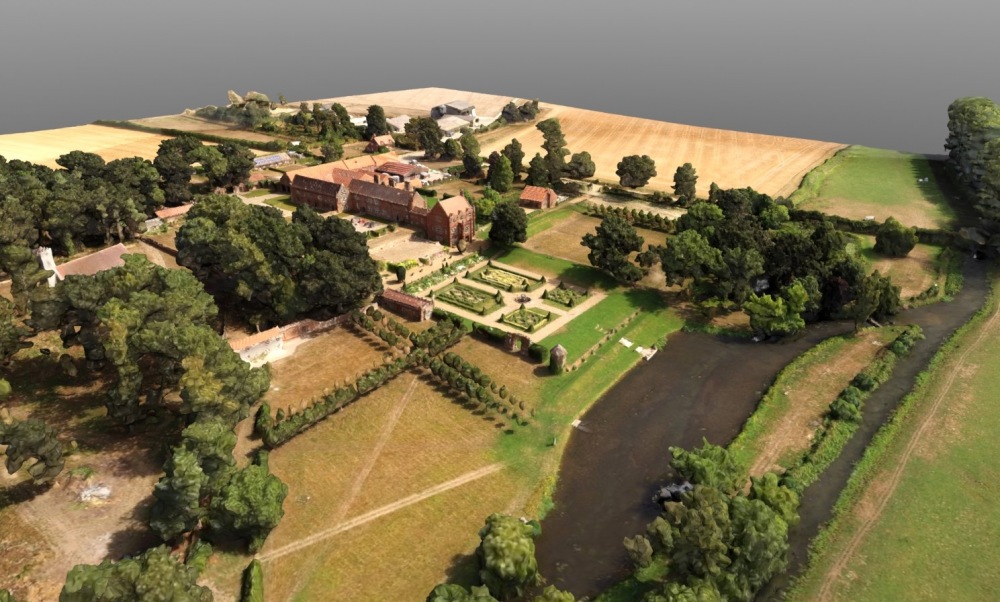 One of the principal features of the interior of the church is the tomb of Clement Paston. It was Clement, retired from his service at sea to Henry VIII and Queen Elizabeth, who built the latter stages of the hall. 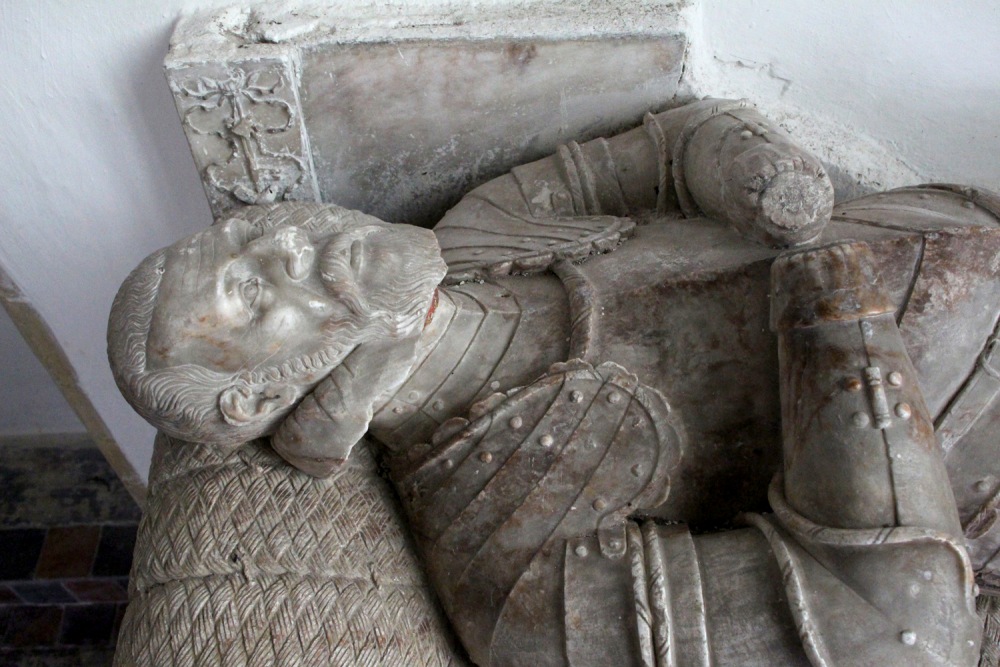 Model update:
August 2018
Photogrammetry has been carried out on the site; a drone flight around the church has provided imagery for the construction of the 3D model.

The south side of the church shows many structural repairs and changes; the blocking or changing of the size of windows is particularly evident.

On the north side of the church are the remains of a vestry or side chapel.