The Pastons and the Pursuit of Power

60 years ago, in the introduction to the previous last major Paston exhibition in Norwich, R W Ketton-Cremer described the staging of the event, in the year of the 1953 Coronation, as an inspiration. It was, he explained, the fitting tribute to a family that had shown such loyalty to so many monarchs.

In 2013, the Paston exhibition at the Norfolk Record Office (NRO) had other ‘inspirations’. In June 2012, the NRO had purchased at auction for £3000, a letter written in July 1455 from Sir John Fastolf to his cousin John Paston. The Paston Heritage Society (PHS) had supported this historic acquisition and this partnership between the two organisations laid the foundation for the exhibition. The letter needed to be shown to a wide Norfolk audience and when the PHS secured a grant from the Heritage Lottery Fund for promoting the Paston story, we began the year long process of exhibition planning.

The inspiration of the Paston Letters continued as the enduring message of the exhibition and in choosing the title ‘The Pastons and the Pursuit of Power’ we hoped that we could underline the success of the family in both the local and the national context. Exhibits were sourced from the 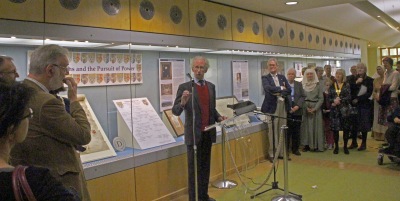 Sir Henry Paston-Bedingfeld at the opening of the exhibition

NRO’s own extensive archive of letters, wills and transactions and other items were borrowed from Sir Henry Paston-Bedingfeld, Paston Sixth Form College, the descendants of Sir John Fenn, The British Library and from the PHS. From these items and from their own lucid explanatory boards, the NRO created an outstanding and coherent display. The content of the exhibition may still be accessed and enjoyed on the NRO web site. 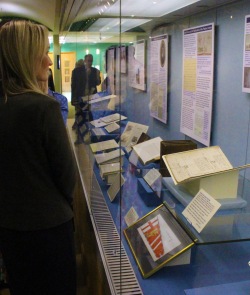 Accompanying the exhibition was a series of eight lunchtime lectures, chosen to illustrate the main theme, each attracting an average audience of between 60 and 70. We heard about the essential activity of letter writing (and no other collection survives to match the Pastons’ legacy), the turbulent and dangerous climate of the 15th century through which the Pastons navigated, the family themselves and the books that inspired them, their dramatic fall and the subsequent resurrection of their name through the publication of the letters by the remarkable John Fenn . We also journeyed into the magnificent painting the ‘Paston Treasure’ (which hangs in the Norwich Castle Museum).

The painting of the ‘Paston Treasure’ itself provides a fitting symbol, filled as it is with subtle memento mori and an esoteric miscellany that speaks of the eclectic and extravagant interests that abounded within the Pastons’ Oxnead ‘paradise’. 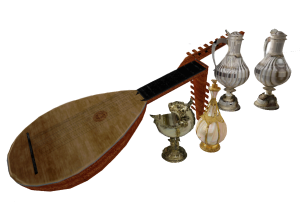 Treasure from the Paston Treasures painting

There was also often more than meets the eye with the Pastons themselves. Their skilled and ruthless use of the law, their profitable marriages, their careful allegiances and royal patronage – all of this to become one of the wealthiest families in East Anglia. And yet, the tender exchanges revealed in the letters, the high standards of education and learning, the significant contributions to the nation’s cultural and architectural inheritance, the loyalty and devotion to duty that finally led to their downfall – these elements speak of the pursuit of power but they also speak of humanity and of achievement.

The exhibition was also accompanied by events for schools. One theme of the workshops for young people and of the exhibition itself was heraldry. Almost every section of the exhibition – from pedigree rolls to memorials, to heraldic wedding tabards, the key roles in the story of two Royal Heralds and to the modern heraldic style illustrations that accompany the work of contemporary Paston poets, – all with a debt to heraldry. 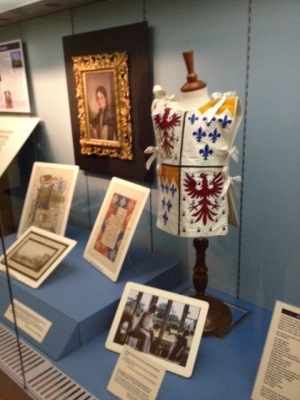 A Paston-Bedingfeld tabard at the exhibtion.

Another theme that emerged from the exhibition panels is the continuing insight that the Paston story provides for our understanding of the social history and topography of Norfolk. The success of the Paston family owes much to the importance and status of Norwich and Norfolk from 1350-1750, the links between the great families, wool and the proximity and ties with continental Europe.

The exhibition was fittingly opened by Sir Henry Paston-Bedingfeld Bt. Norroy and Ulster King of Arms, Patron of the Paston Heritage Society and President of the Norfolk Heraldry Society. It is unlikely that 60 years will pass before another exhibition is staged. One outcome of the collaboration between the PHS, the NRO and the University of East Anglia that has emerged from this exhibition, is a project to provide a virtual ‘digital’ Paston Museum. Although the special experience of seeing ‘real exhibits’ will always remain, the opportunity to travel into the world of the Pastons through an array of links, simulations, graphics, references, explanations and sources should, we intend, provide a permanent gateway to the inspiration that abides in the legacy and scope of the Paston Letters.

Without doubt, heraldry will continue to provide a colourful and accessible shorthand, that will help visitors of all ages navigate their way through this web based architecture and the multi layered story that it will tell.