The Heraldry of the Pastons

The churches and halls of Norfolk are rich in heraldic references and this is certainly true of a number of places associated with the Pastons. 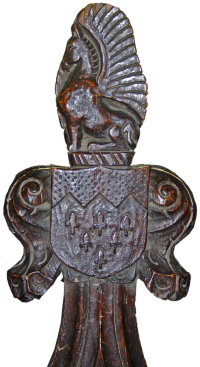 A pew end at St Margarets church, PastonTwo items offer themselves in the village of Paston, one real, the other virtual. In Paston church there are a number of Paston tombs with associated heraldry. However, it is the pew end with the carved Paston gryphon or griffin which is of most value in indicating that the Pastons worshipped and held sway in this place. This they did until the middle of the 17th century. Locating and identifying the gryphon is one of the elements of a heritage trail set out for visitors. Judge William Paston (1378-1444) purchased many of the family’s early estates in Norfolk and set about building a manor house at Paston in the early part of the 15th century in what was an important step in achieving recognition and status.

The virtual reference is from Francis Blomefield’s 18th century History of Norfolk where he describes Paston Hall thus, “The old hall of this family stands near to the church, and had two courts, in the inner court is a well; the buttery hatch, with the hall, is standing, but the chambers over it, and the chapel, are in ruins. Over a door of the great staircase, out of the hall, the arms of Berry are carved”. Agnes Berry was the wife of judge William Paston. This description of the arms provided important clues in the 3D digital reconstruction of Paston Hall in its later, Tudor, heyday.

On the great doors of St Andrews Hall in Norwich are the arms of Paston and Mautby. John and Margaret Paston (née Mautby) lived nearby in Elm Hill and in the mid 15th century they paid for the doors and a new roof to St Andrews Hall following a disastrous fire. The Pastons also rebuilt St Peter Hungate church. Such gifts were an indication of the Pastons’ wealth and their ambition to be ranked amongst Norwich’s ‘great and good’.

The Pastons owned much highly fertile land just north of Great Yarmouth in the area once known as the Island of Flegg. At the centre of their estates was the mighty Caister Castle, originally built by Sir John Fastolf and bequeathed to John Paston. The Pastons finally secured the castle after many years of struggle and disputed ownership. Incidentally, Sir John's arms are seen on a piece of stonework at Blickling Hall which the Pastons took to Oxnead and was then taken to Blickling when Oxnead fell into ruin. 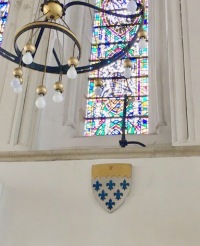 The Paston arms in Great Yarmouth minsterJohn Paston’s second son took control of the family in 1479 and over the next 25 years secured the family fortunes and also a significant stake in the affairs of Great Yarmouth. This family success and influence is visibly reflected by the presence of the Paston coat of arms on the wall of St Nicholas minster in Great Yarmouth. 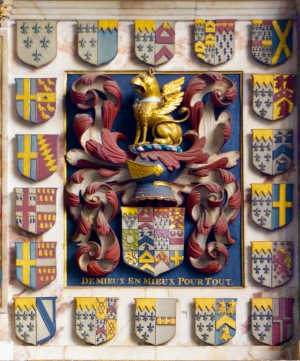 The display of family arms above the tomb of Sir William Paston, North Walsham

Arguably the most informative Paston artefact that remains is the magnificent tomb of Sir William Paston in St Nicholas church, North Walsham. This is one of the largest parish churches in the country. The tomb is also the part of the Paston legacy that has the greatest heraldic value - it is adorned with 18 heraldic shields. Sir William Paston had the tomb constructed in his lifetime and the boys from the school he founded nearby (The Paston School) were expected to visit it annually until the 1960s. The shields tell the story of the Paston ancestry and marriages and form a substantial body of information. There are a further 20 or so memorials in the church that show arms.

In 1612, Edward Paston constructed a fine hall at Barningham near Holt, close to several Paston estates in North Norfolk. The house is privately occupied but the owners have been most helpful in allowing the Norfolk Heraldry Society to visit and to record the heraldry – some of it added to by John Adey Repton who extended the original structure in the 18th century. 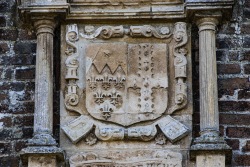 Paston impaled with Berney at Barningham HallBarningham Hall is the last remaining Paston house. Edward Paston’s Arms (Paston impaled with Berney) are to be seen over the main entrance. This confident expression of family status may reflect the brief respite felt by Catholic families such as the Pastons and Berneys, during the reign of King James I.

In the 17th century the Pastons developed Oxnead Hall as a centre for their artistic and scientific interests. Despite a period of self-imposed exile for Sir William Paston during the English Civil War, the royalist supporting Robert Paston (William’s son) not only entertained the newly restored Charles II at Oxnead but was granted the title Earl of Yarmouth. Much of the original Oxnead Hall has been lost but the tombs in the church bear the Arms of the earls of Yarmouth.

This magnificent painting hangs in the Norwich Castle Museum and was the centre piece for a major exhibition in 2018, a collaboration between the Norwich Castle Museum and Yale University’s Department of British Art. Shortly before the exhibition was due to open, a painting known as "The Paston Perspective", hitherto unknown, was identified hanging in a London house by a keen and informed individual who spotted the Paston heraldic shield. This painting was included in the exhibition as it is thought to represent the ideas of Sir William Paston for his landscape designs at Oxnead Hall.