This page shows the development of the Bromholm Priory 3D model, up to its completion.

While the Priory at Bacton is not a property once owned by the Pastons, it is integral to the family's story. As at September 2020 there is no general public access to the property, but it can be seen from the lane which runs along what was once the boundary of the priory. 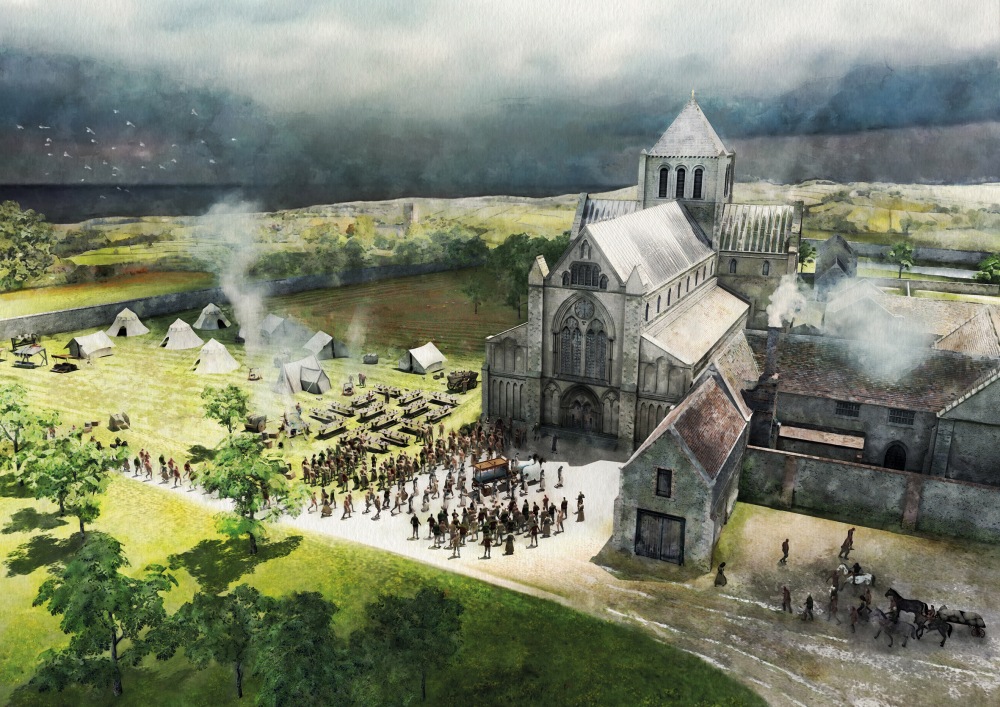 One of the most amazing events at Bromholm Priory was the funeral in the early summer of John Paston (1421-1466). He had died in London in late May 1466 and the Paston Letters record the extraordinarily lavish arrangements that were made to bring his body back to Norfolk for burial at Bromholm Priory. Our historical artwork here uses the 3D recreation of the priory as the basis of a depiction of the funeral. He would not stay for ever in peace there; at the time of the dissolution of the monastery, his body was taken to the churchyard at Paston church, where it rests - unmarked - today.

The 3D model of Bromholm Priory is now complete. The image you see here is of the central buildings; the model for the whole of the site is rather too large for this particular way of viewing, but as you'll see in images we're extracting from it, it covers the full extent of the priory.

It may be that the annotations to the model overlap the edges of your viewing window. You should see a scroll bar on the right of the animation panel to help with this; alternatively click to use full screen.

We'll be using this model for various features on this site - it's already in use for the animation of William Paston's visit for younger viewers.

Picture from 3D model:
2nd July 2020
With limited access for a while to the other two sites on which we're working, there's been a concentration on completing the Bromholm Priory model. This still picture, work still in progress, is taken from the 3D model and now includes the whole area of the Priory's lands. The central area with the church and cloisters is firmly based on the known archaeological evidence, and much of the north gate still stands. The boundaries of the estate remain very clear today and have been given a wall for this model. Doubtless the grounds were often a hive of activity; so various representative buildings have been introduced, with market stalls by the north gate and a smithy by the west gate. Grain and vegetables grow to supply the needs of the community. 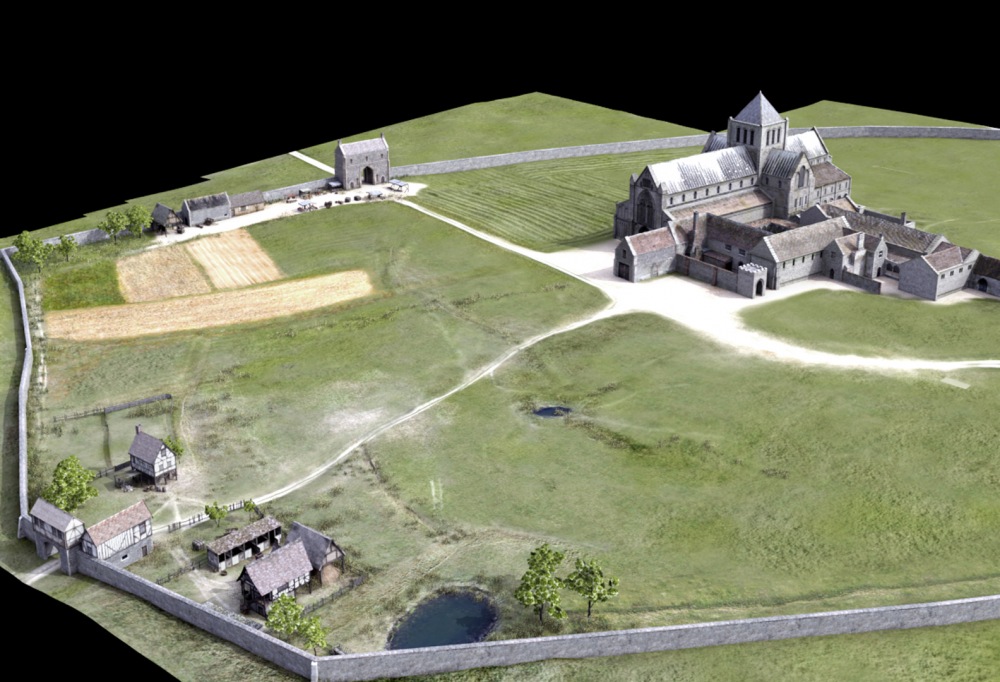 Bromholm Priory with the west gate to the left of the picture.
Video from model update:
17th March 2020
We've been experimenting with ways to put people into the 3D models, so here's a very short clip of life coming back to the cloisters at Bromholm. Take a look at the figures in the centre of the cloisters and the monk walking at the back. It took quite a while for the computer to produce just this 10 seconds, so we're pressing on with the models and will come back to introducing characters at a later stage.

Model update:
28th January 2020
Detailed modelling of the priory has continued over the months. The cemetery in the foreground and the cloisters in the middle of the complex can be seen. The dormitory block in the centre foreground is now complete. There's a little more attached to this main area to do, working from geophysics evidence of an industrial area, and then we'll put a 3D model on the screen. 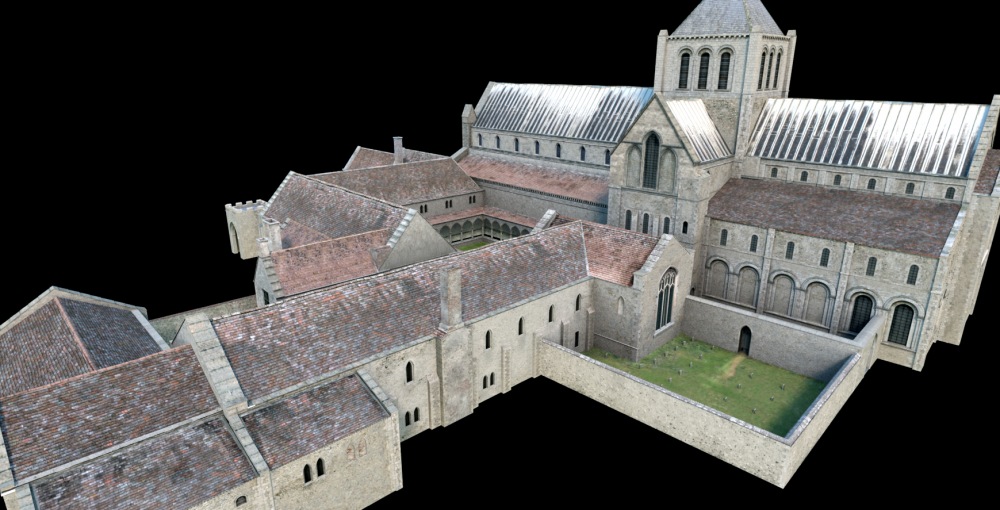 The whole central area of the priory is now complete.

Model update:
12th September 2019
The remaining standing elements of the wall of the church, once at the centre of the priory, have risen again. The project continues with the cloisters, the dormitories and other support buildings for the medieval religious community. 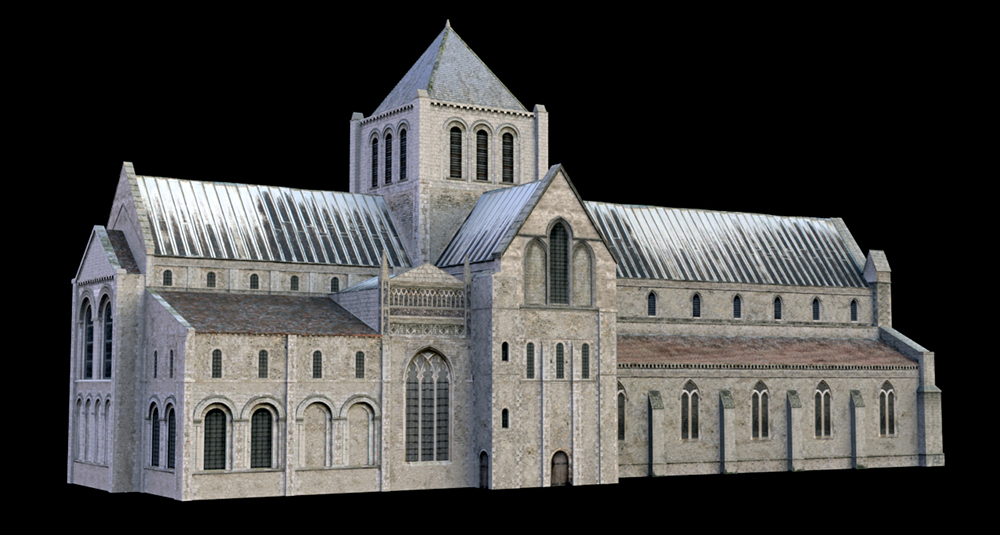 The completed 3D model of the church within Bromholm Priory.

This is a general 3D of the central area of the Bromholm site as in 2019. The annotation points out some of the key features. Zooming in to the site will result in a less than crisp image; this is caused by the necessity to compress the file somewhat for presentation on the internet so that the download time is not excessive. For the project, the imagery is stored at a higher level so that it can be used for other purposes.

The area, as will be seen from some of the other pictures below, does not cover the complete site up to the precinct boundaries. It concentrates on where the main church, cloisters, dormitories and other buildings once stood.

Following on from the comments below on using the photogrammetric survey, on the right is a 3D rendition of the northern gatehouse. Two gatehouses are known; little remains of the one in the western perimeter wall, but visitors today enter through this northern gatehouse. Annotations on the model help us understand the original building.

Creating features and textures for long-gone walls has to be based on evidence, finds of stones or comparable buildings. For the west facade our 3D artist has looked at the mother Cluniac priory of Castle Acre and at the Benedictine priory of Binham Abbey. The latter has been used to suggest a design for the west facade of the Bromholm model. Binham itself comes into the Paston story later on; after the dissolution it becomes the property of Thomas Paston, and he and his grandson begin to demolish it to reuse its stone. 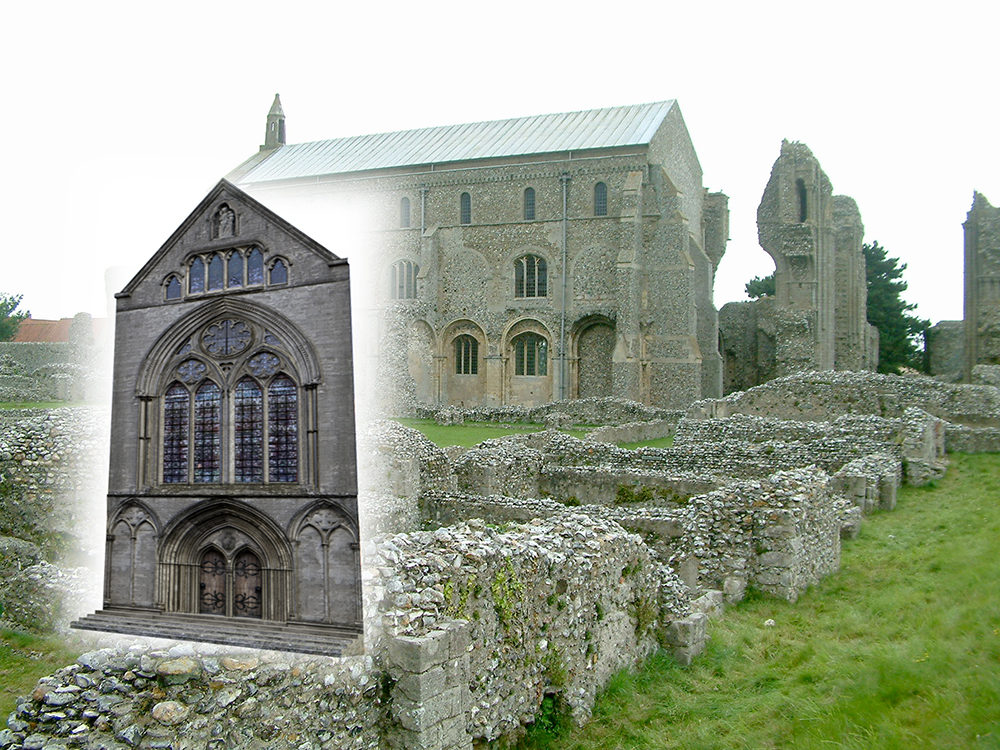 The suggested Bromholm Priory west facade against a Binham background.

And now the model of the Priory from the available evidence begins to build. 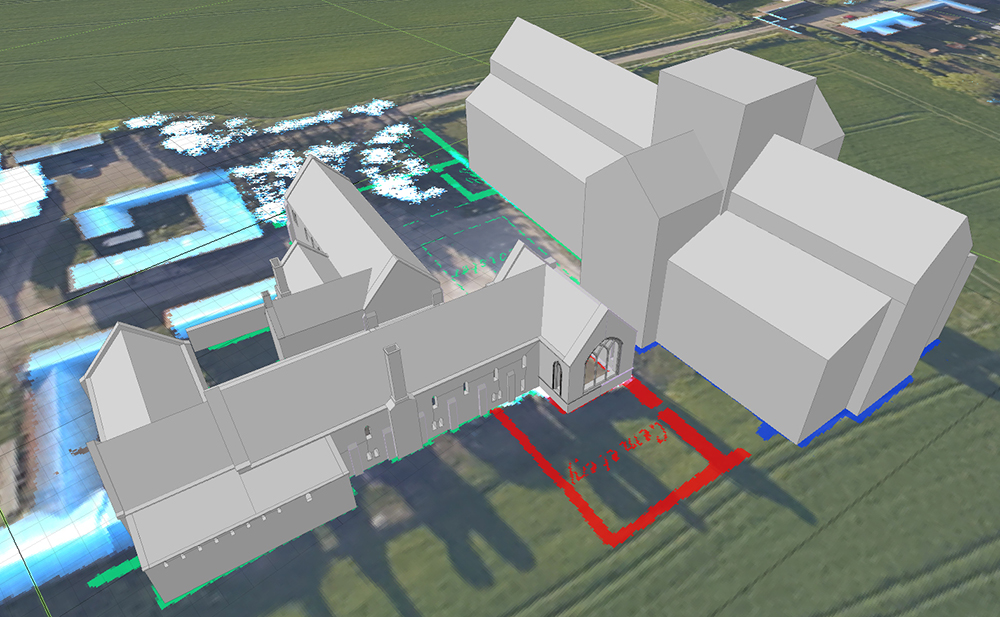 Bromholm Priory begins to rise from the gound.

As different sources are developed, there's the opportunity to align them. In this case the details from Harrod's map have been superimposed on the photogrammetric image. The Harrod plan is very accurate in terms of scale and only needs a little tweaking to address the alignment issues.It is interesting to note that there are indications that the ruins seem more extensive than they initially appear. For example, in the image below there seem to be raised areas of vegetation on or near some indicated wall lines just south of the refectory. 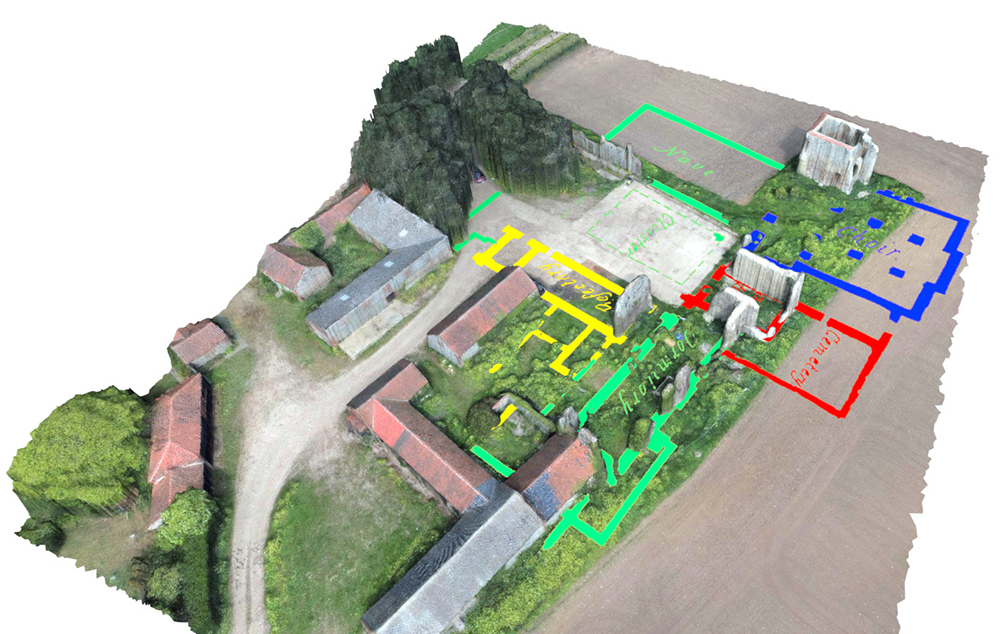 The picture below shows a still from the photogrammetric survey. We're now able to begin to upload images in 3D format. The 3D model on the right shows the 'tower' that you can see on the right hand side of the still image below; while today it has the appearance of a tower, it is in fact the north transept of the priory. It is somewhat disfigured at its base, because for the Second World War it was reinforced to become a machine gun post, but maybe the reinforcement has been responsible for it being one of the standing elements today. In the modelling process it provides assistance in understanding the size of the original building.

A full photogrammetric survey was undertaken of the site. About 400 photos were taken by a drone circling the area, with a further set of pictures taken vertically. Specialist processing software turns these images into 3D models; the perspective view shown gives an explanatory view of the site, and the vertical view supplies a base for the historic modelling. The camera on the drone records the location and height from which each image is taken, and this enables the model to be placed with great precision. 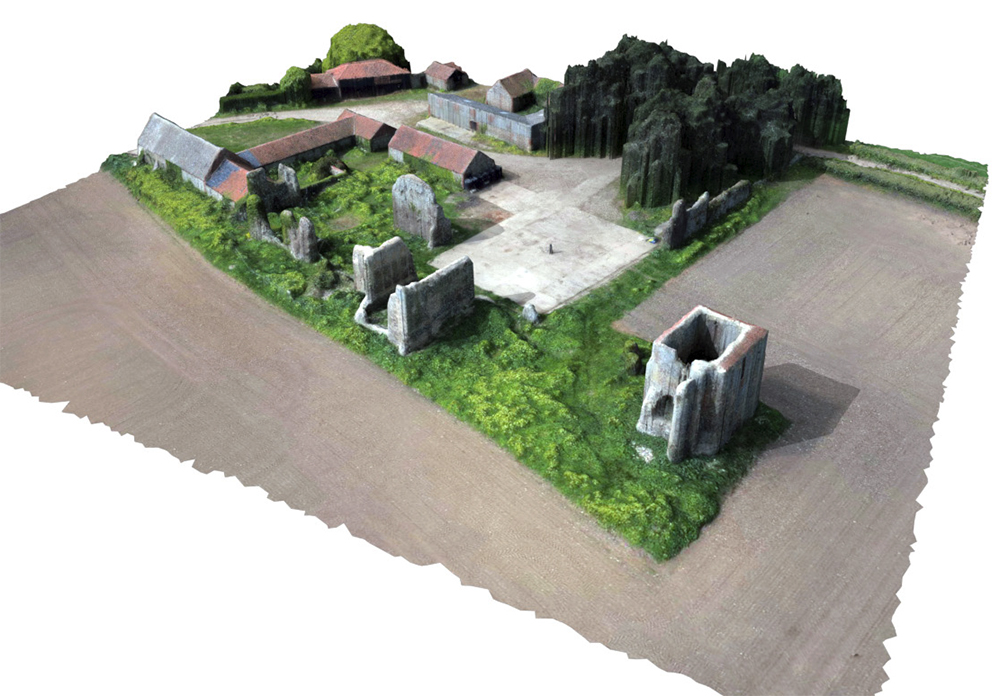 English Heritage undertook geophysical surveys of the site in November 2005 and March 2006. Overlaying their areas of magnetic anomaly provides further evidence of possible areas of interest. Their full report can be accessed and downloaded as a PDF from the English Heritage site. 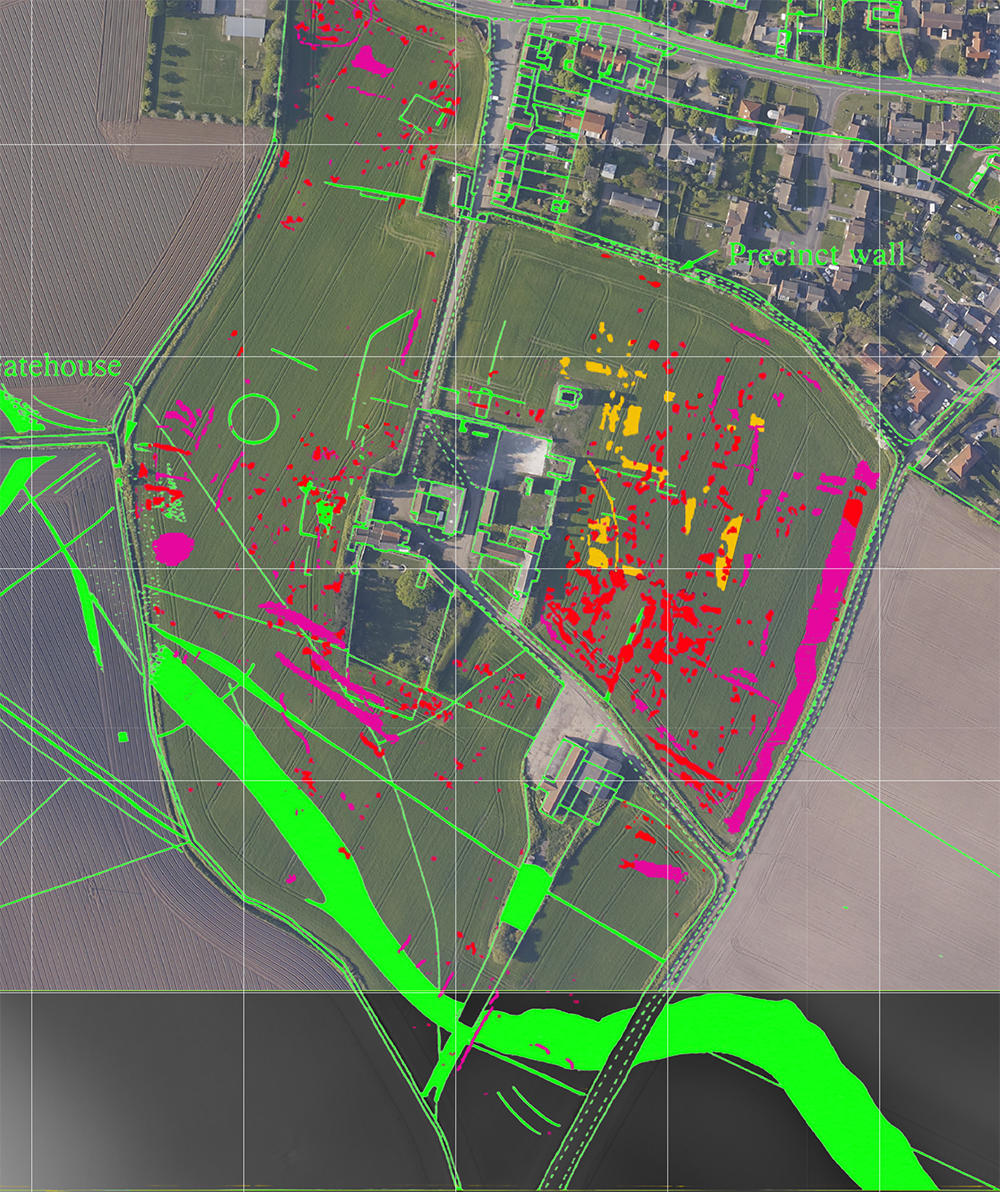 As ever the first stage of building a 3D model of the site is to gather all the available information on what it might once have looked like. In this case, the albums of Daniel and Alfred Savin provide photographs from the second half of the 19th century. Daniel Savin was photographing in north Norfolk from about 1860; the albums are kept at Cromer Museum. The Priory began to deteriorate from the dissolution of the monasteries by Henry VIII; in Victorian times, as today, much of the site was used for farming purposes, and stone from the Priory has been used elsewhere in the locality. 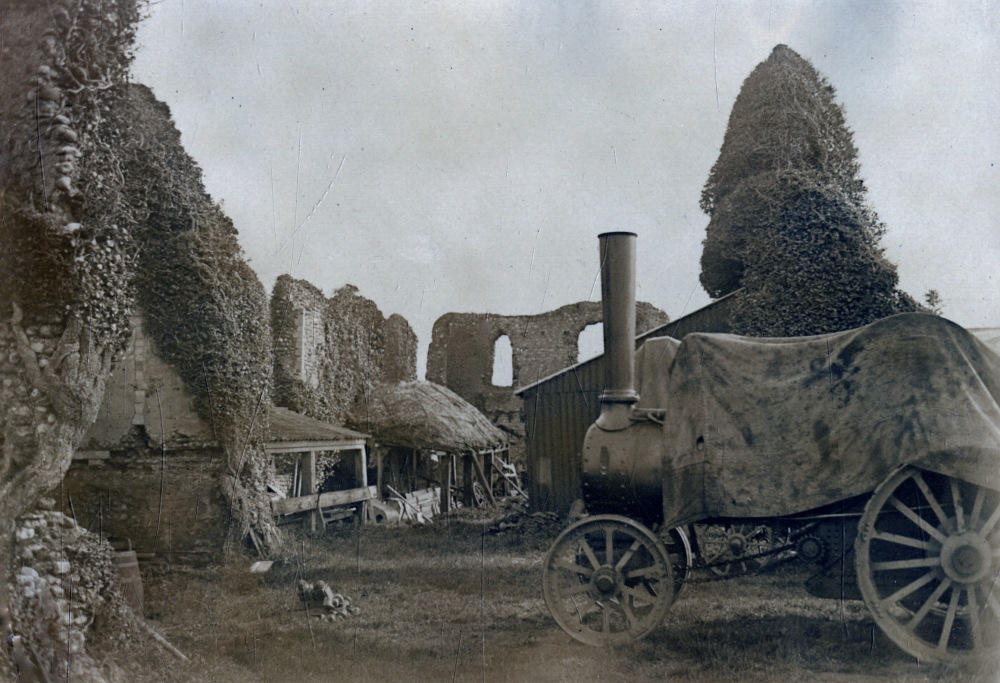 A plan of the Bromholm ruins was published by Henry Harrod FSA in 1857 (Gleanings Among the Castles and Convents of Norfolk, p. 220) and was a combination of his own survey made in 1854 and a plan made by Mr Spurdens in 1822, when the remains were more extensive. 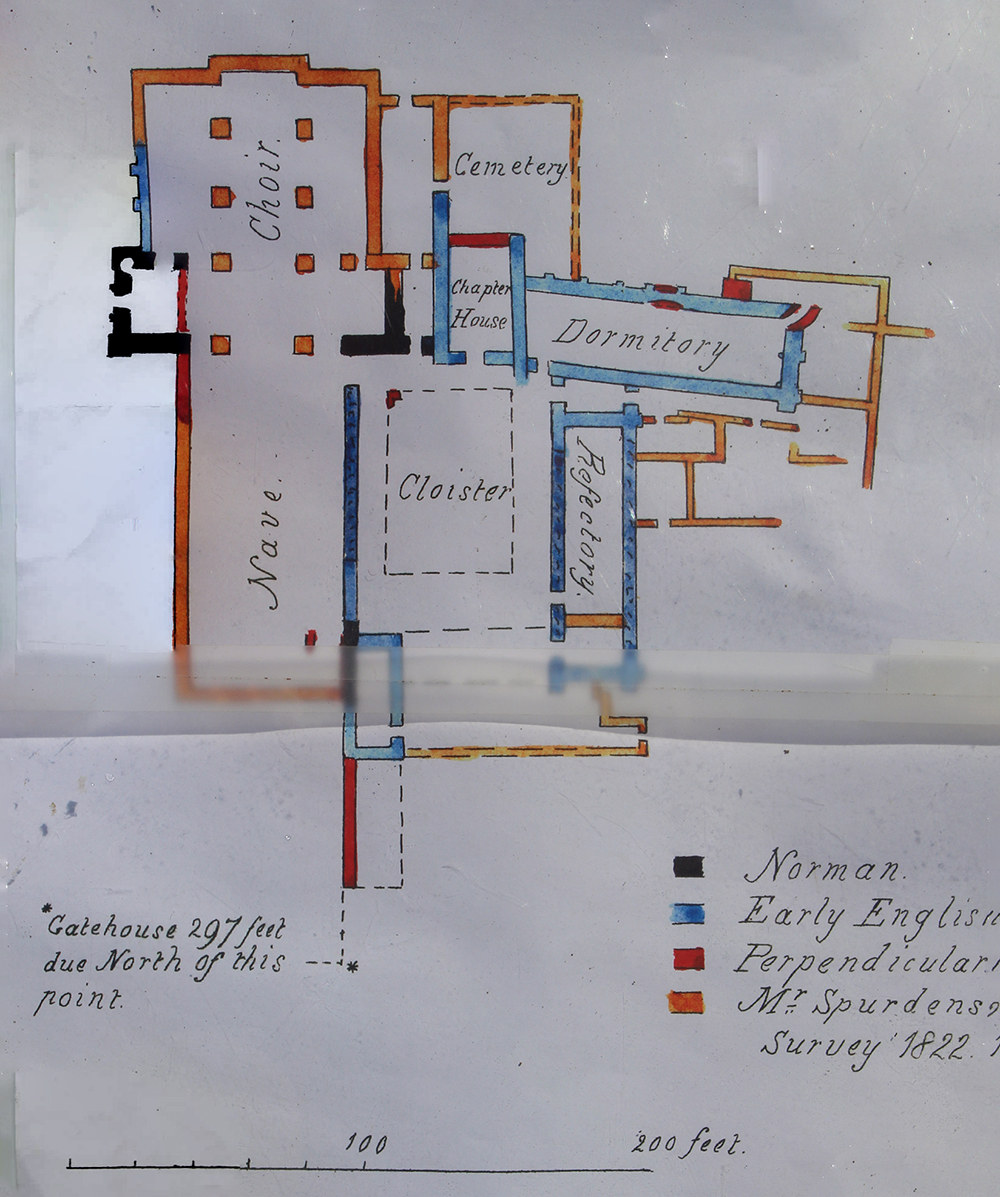 The Paston Heritage Society has previously been able to arrange visits to the private site at Bromholm. Great care needs to be taken because, as the photograph illustrates, some of the walls are in an unsafe state. While the land is privately owned, the site is under the guardianship of English Heritage. 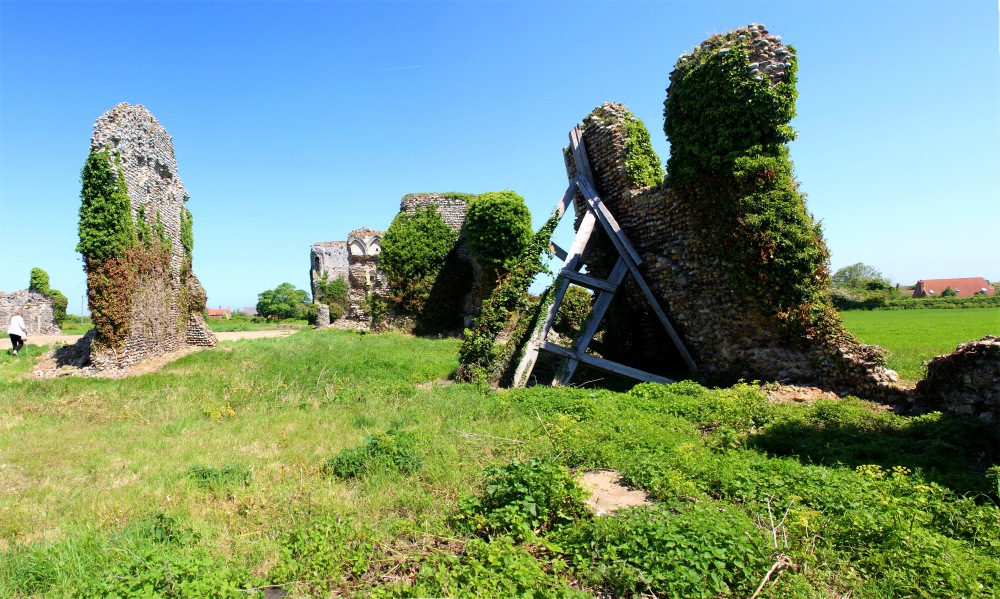