This page shows how the Paston Hall 3D model was created.

Finally the complete 3D model has come together. The imagery on the right enables you to move round the whole building. As the support information says, is has to be a suggestion of what the building might once have looked like but all the available evidence has been drawn together to be as accurate as possible. The notes on the image itself quote some of the sources that have been used.

The full size model file - this one has been reduced somewhat to enable a satisfactory download time on the internet - will be used to produce a number of other outputs, which you'll see on this and other pages in due course.

Try walking in under the entrance arch - but don't bump your head!

The Paston Hall model is complete and work moves to further models. There have been many iterations but we now feel that we have a reasonable representation of what Paston Hall looked like circa 1600. The still image we have used here pictures it as it might have been on a summer's day of that year, with the gardens in bloom. We will be adding some further images; an image which you can rotate and view in 3D on the sceen and video of the house overlaying the modern scene. As part of this this we have carried out full drone photography of the house. 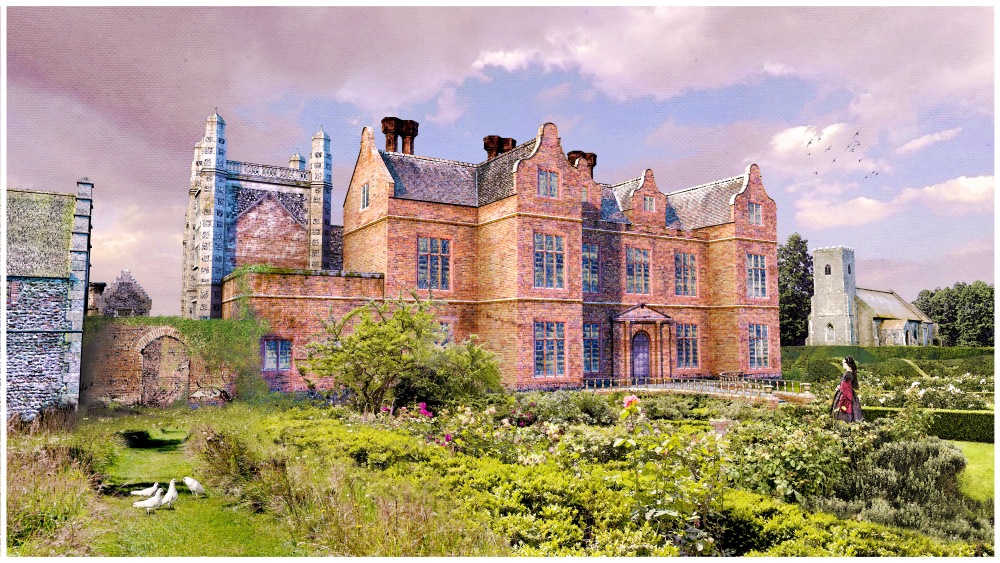 Model update:
April 28th 2017
I have been looking at establishing a workflow for texturing the model. I decided to concentrate on the North east corner of the Hall which contains the oldest buildings and that (in my mind) have been re-purposed into a larger service area. I thought it would be useful to show a final specification as far as this corner of the model was concerned and set a texturing standard to aspire to. 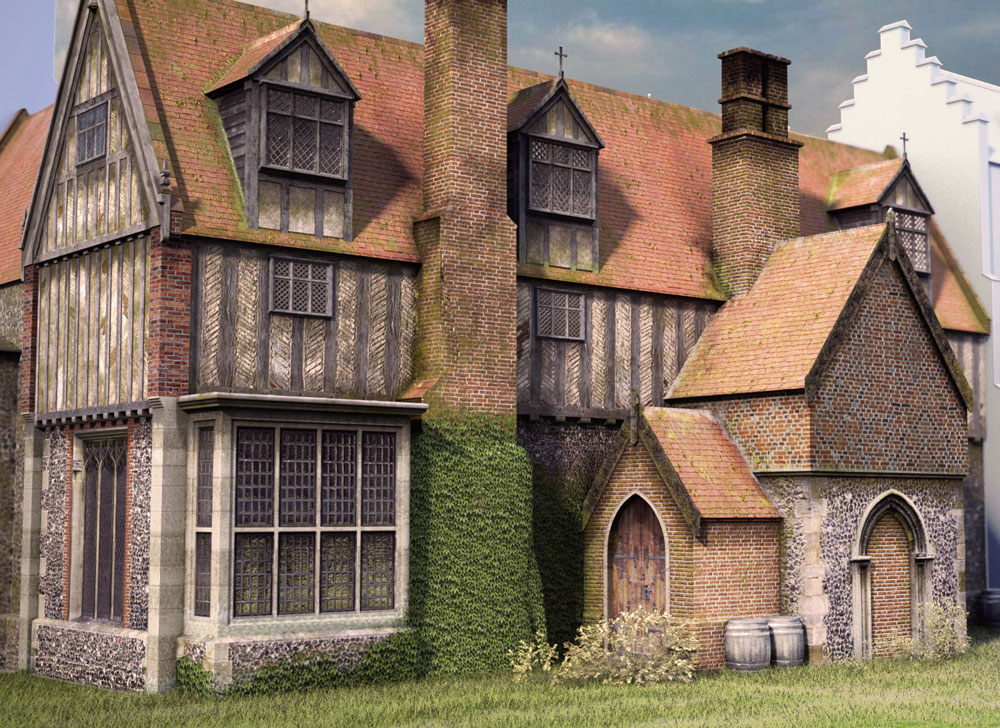 I have switched my attention to collating all the evidence gathered about the Hall which provides a context for the reconstruction. I have written the following document entitled, 'Paston Hall - A new appraisal'.

Model update:
July 5th 2016
After a long period of reflection, I have made substantial progress with the Hall. I was not happy with the direction I was going and after revisiting the evidence and having a slight reconciliation with Boydell I now feel much happier with my approach. I have tried to illustrate the two key phases of the original Hall and William Paston (WP) rebuild.

The east and north wings which include the chapel and service buildings will be from the earlier period with a few WP additions. The south wing is based on the building seen the portrait of WP and the west wing which fronts onto the courtyard is based on the Boydell painting. The entire scope is contained within the footprint shown by the Radar survey. 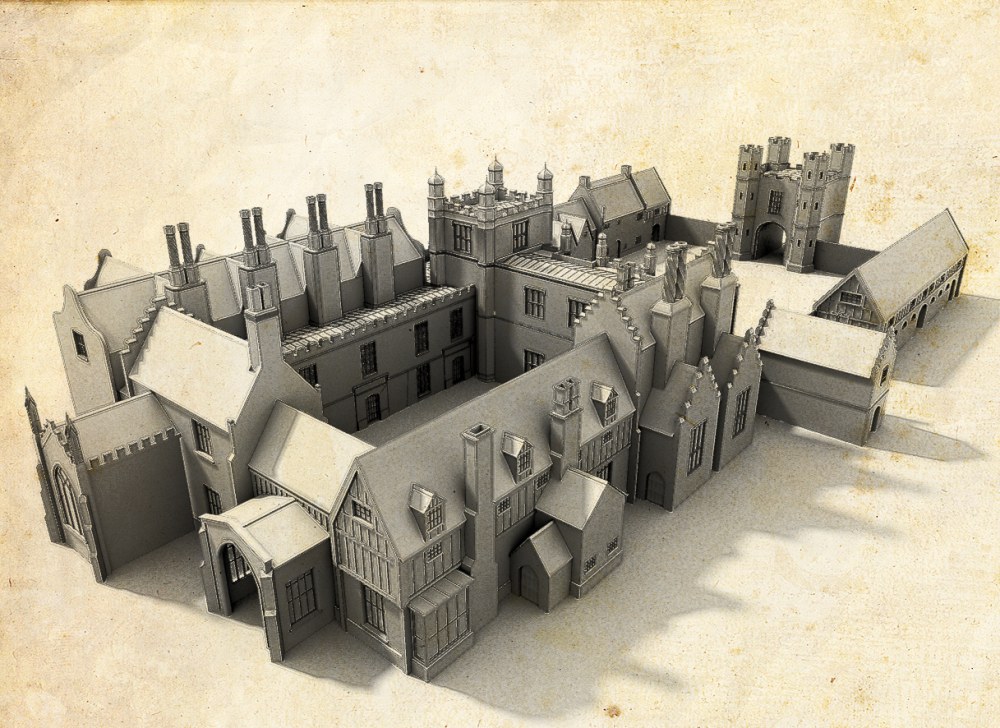 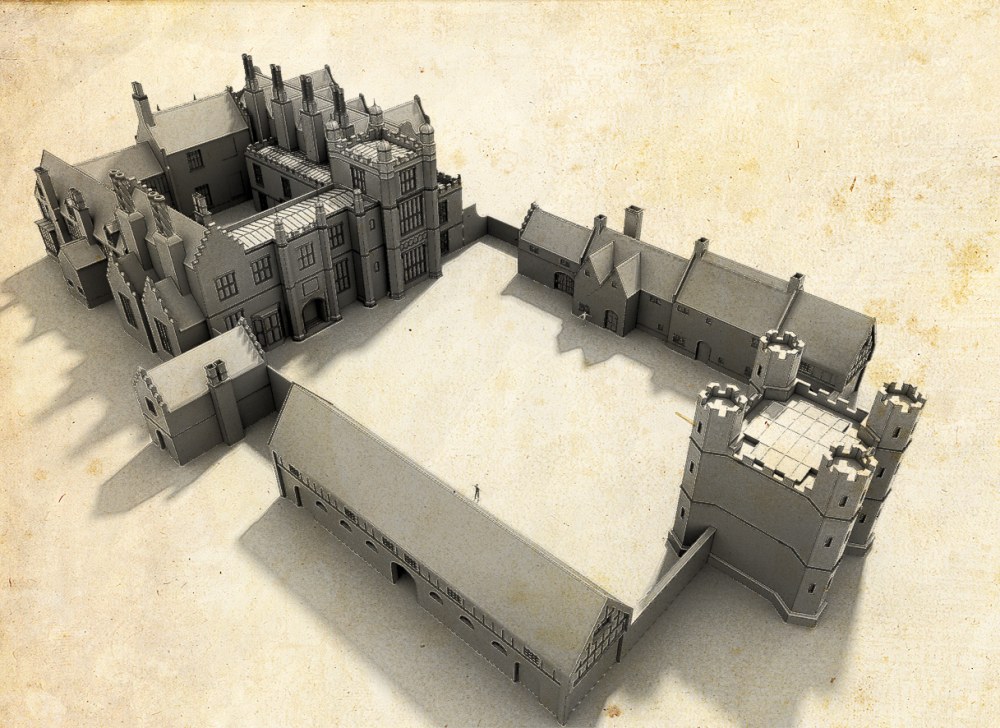 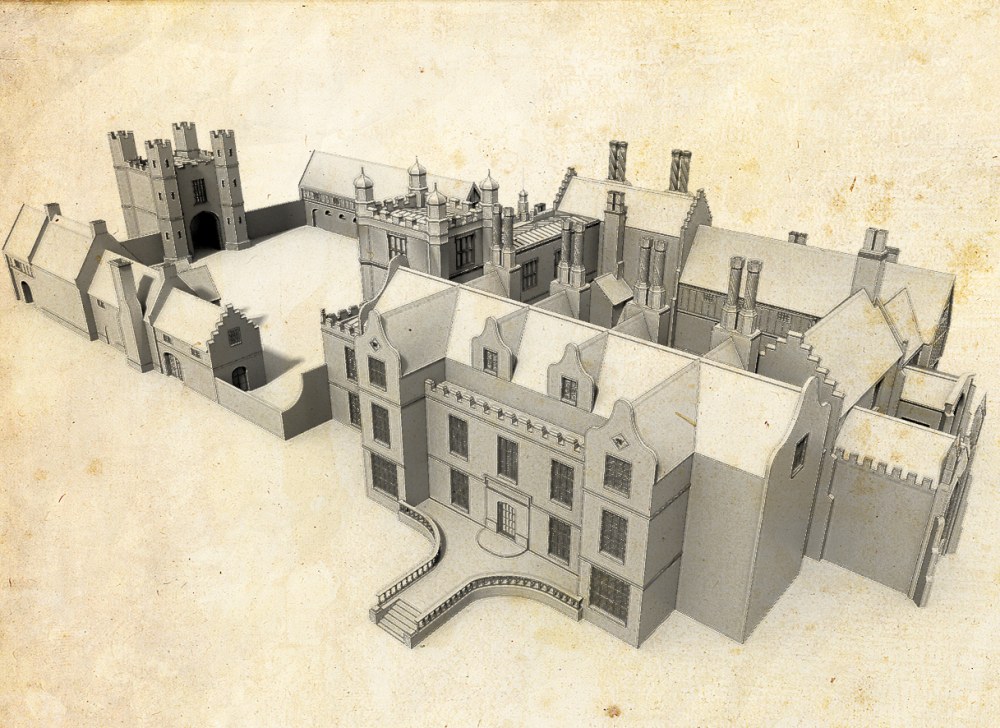 Model update:
August 27th 2014
I decided a month ago to revisit the textures. It was a big decision as it involved much faffing about in order to create seemless quoin stones, etc. I'm guessing I'm about 70% done with the new flint/stone textures - it's a real chore, but needs to be done before I can continue the reconstruction. The new textures can be seen to the right of the building in the image below. 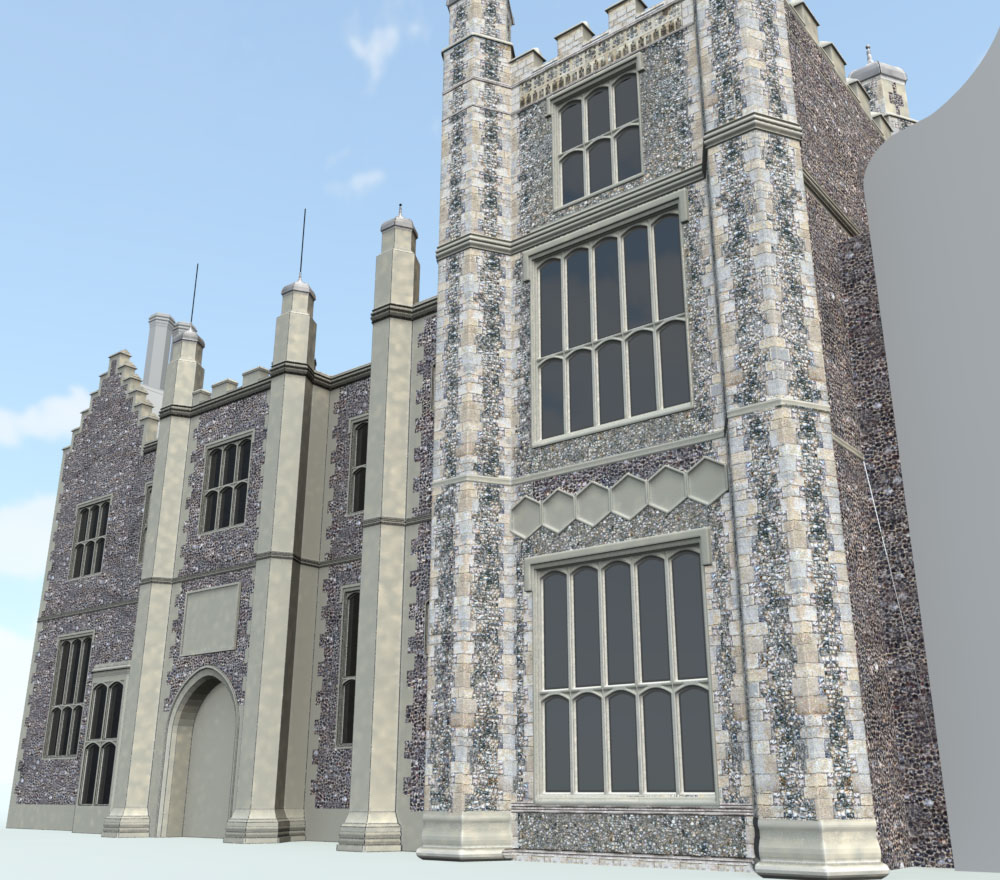 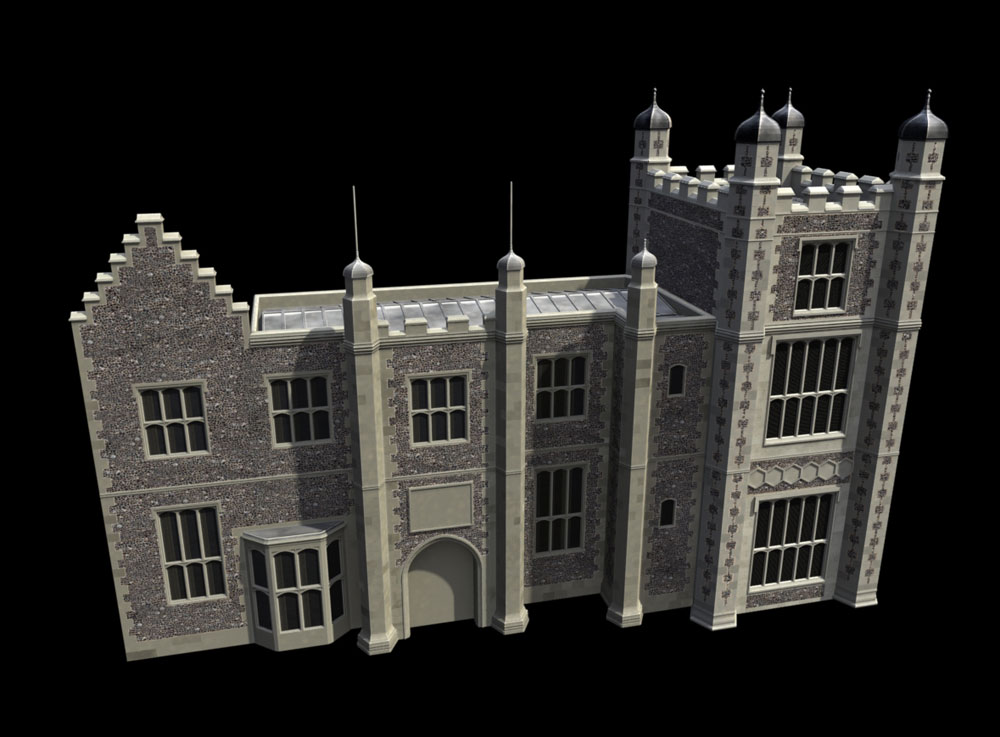 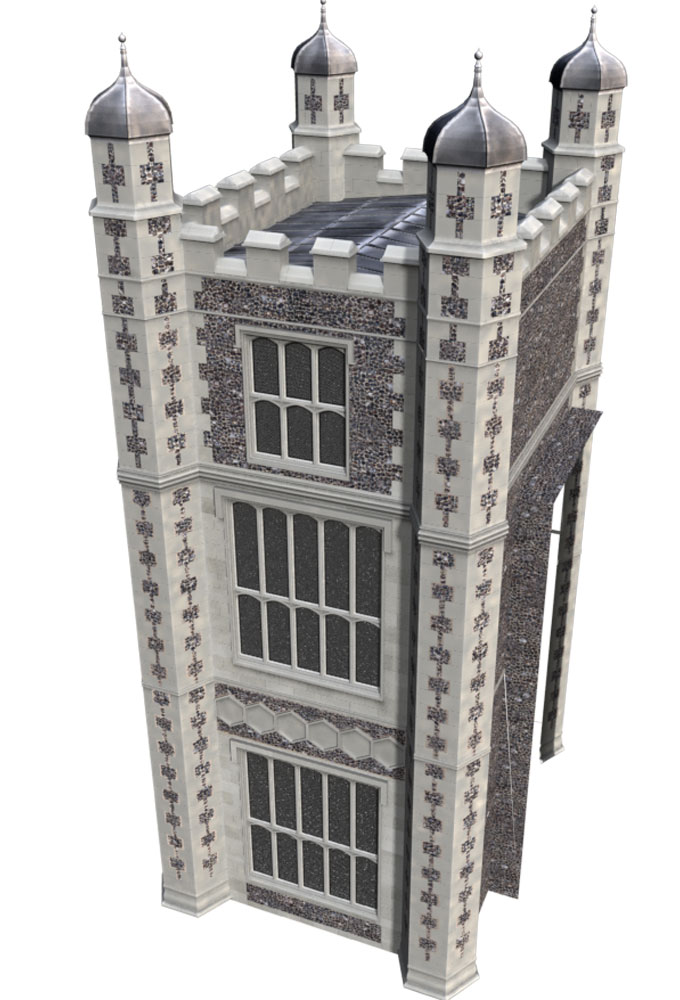 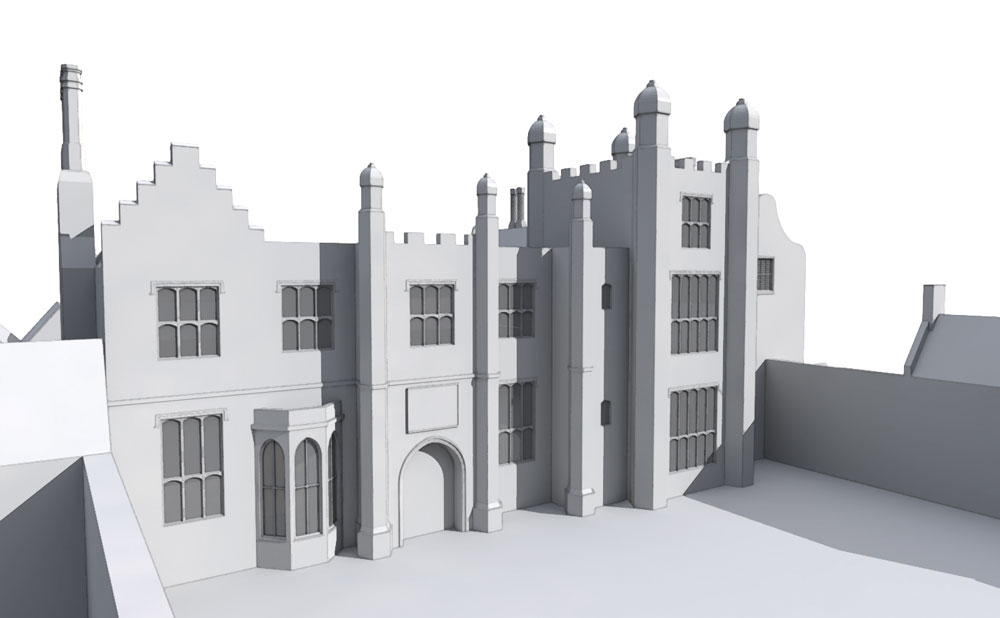 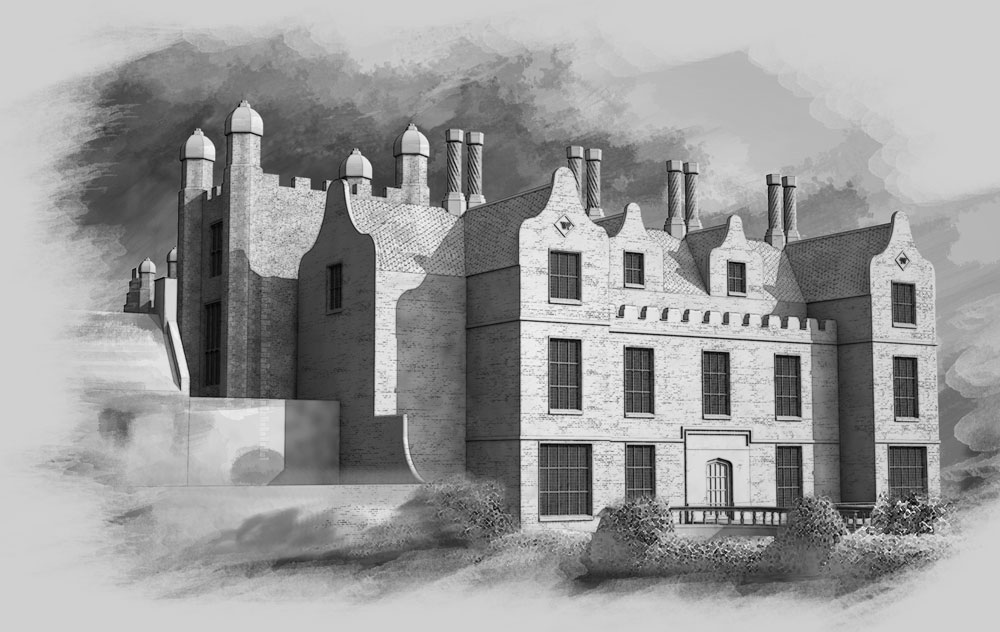 Paston Hall Sketch
Model update:
June 24th 2014
I've spent a lot of time revisiting what the original 15th century Hall may have looked like. There have been many iterations, but having seen the recent images of East Barsham Hall, I saw some similarities with the Boydell picture and currently favour the style below. 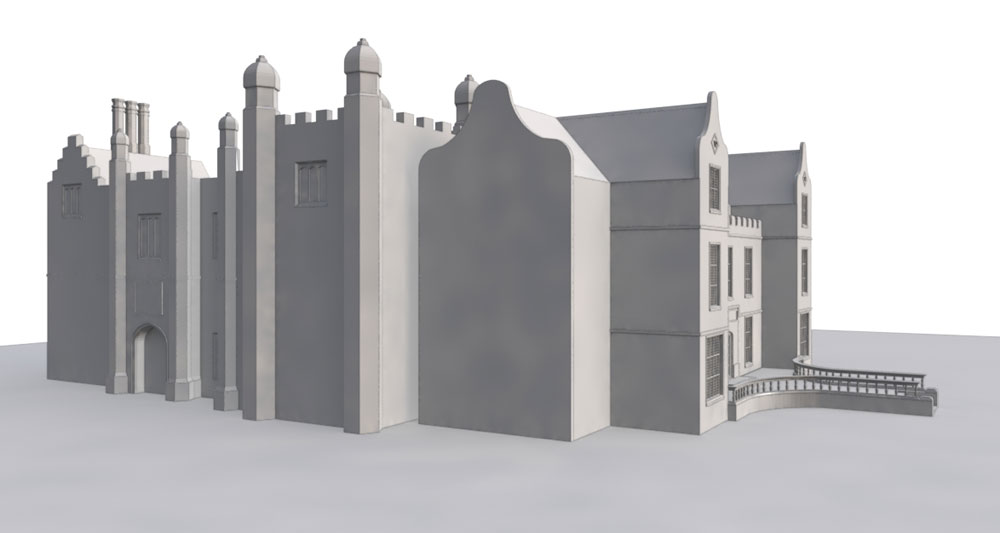 Model update:
May 30th 2014
I've modelled the Dutch gables of the William Paston rebuild to suit those seen in the portrait and the architecture of the time. I've also started on the west elevation of the original fifteenth century hall. There has been an awful lot of reconsideration as I build, so it's a case of two steps forward, one step back. I grow increasingly confident that the building seen in the portrait is the southern part of the hall that William Paston built after the fire. Think of it as a mini version of Hampton Court Palace, where William III built his baroque extension onto the existing Tudor palace.

Model update:
May 23rd 2014
I've rebuilt the southern aspect today as things were beginning to get a bit messy in terms of polygons and vertices. 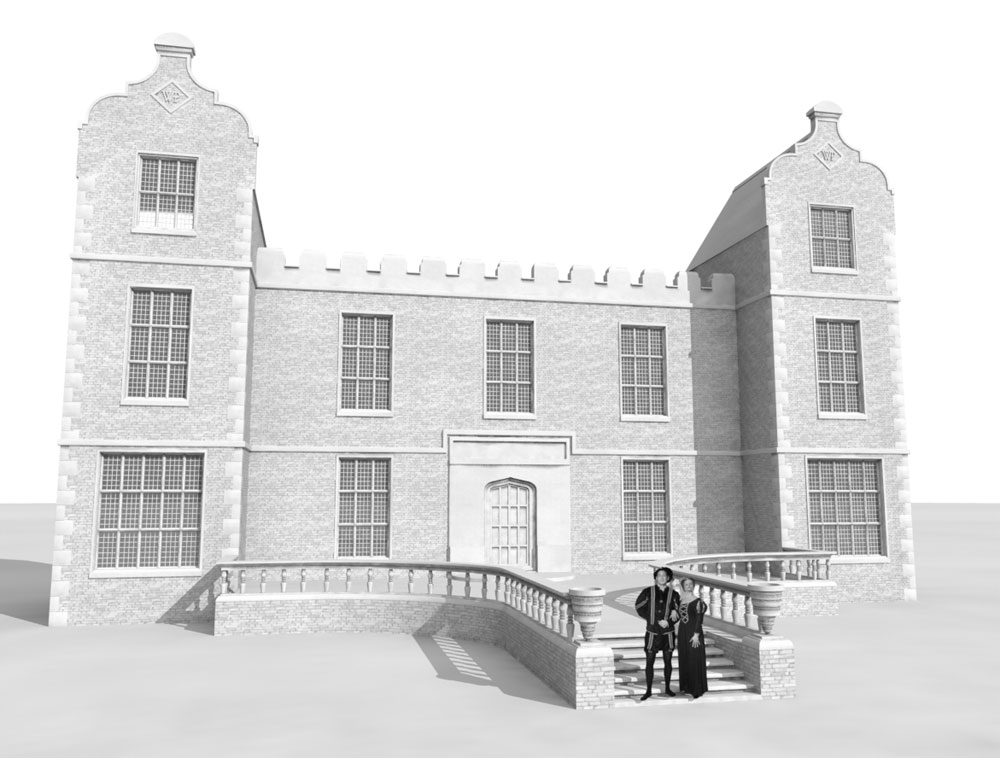 Southern aspect
Model update:
May 22st 2014
Spent the morning blocking out the layout according to my best judgement and using the eye of faith. Beginning to question whether 36ft is too high. 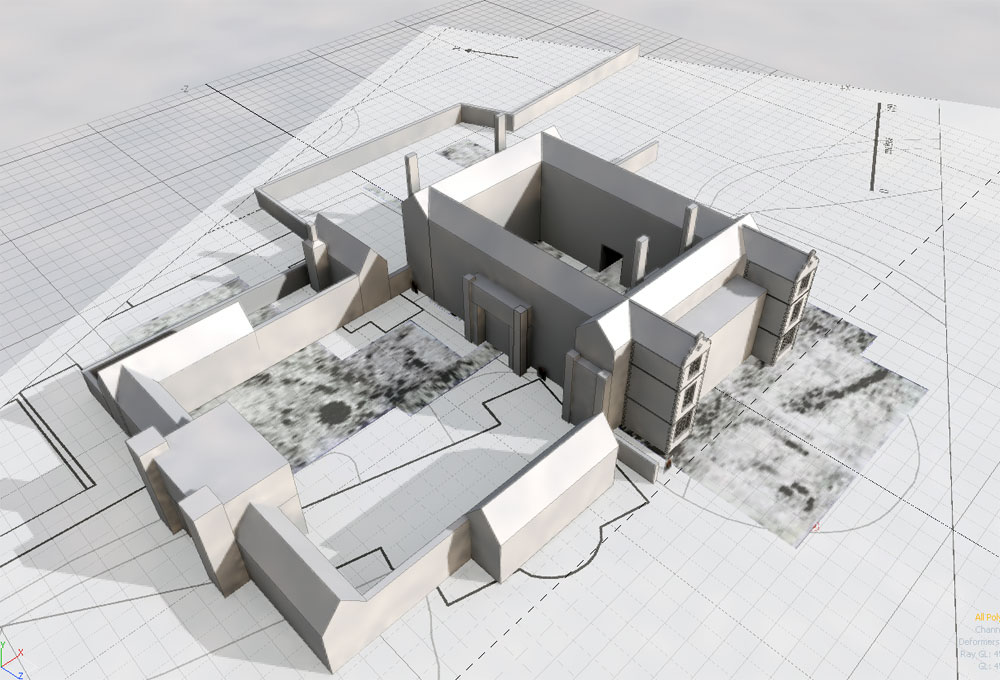 Model update:
May 21st 2014
Other work is getting in the way a bit, so there has not been an update for a while, however, I have started to consider scale and proportions. Based on the Boydell painting and the representation of the hall in the William Paston portrait, I have now settled on a magic number - 36.
36 feet is my best guess of the height of the hall to the top of the third storey (so not including the roof). I have spent quite some time cajoling the model to fit with the GPR, Boydell and the portrait and feel reasonably happy with 36ft. I can now progress with the knowledge that the scale of the reconstruction is as accurate as I can make it. 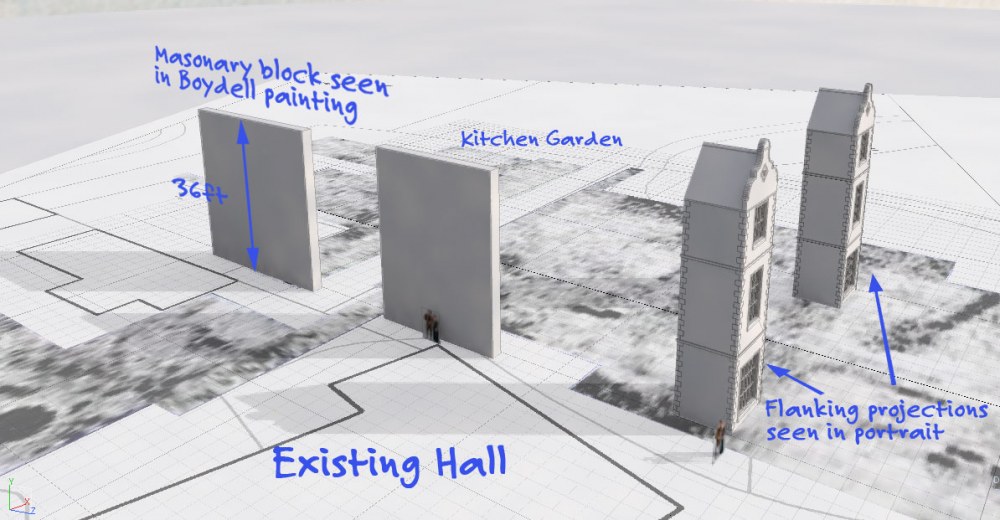 Before starting work on the project a number of investigations and considerations were documented. You can access the appraisal document using the icon on the right.

Sources of Information on Paston Hall

Various sources of information regarding the appearance of the old hall.
From the letters:
Agnes remarked that "your stewes do weel" - stewes were fish ponds

Antiquarian Anthony Norris 1730:
"The Hall much resembles that of a college, and indeed, the marks of its ancient magnificence are still everywhere visible"

Blomefield's History of Norfolk, published between 1739 and 1775:
"The old hall of this family stands near to the church, and had 2 courts; in the inner court is a well; the buttery hatch, with the hall, is standing, but the chambers over it, and the chapel, are in ruins. Over a door of the great staircase, out of the hall, the arms of Berry are carved." 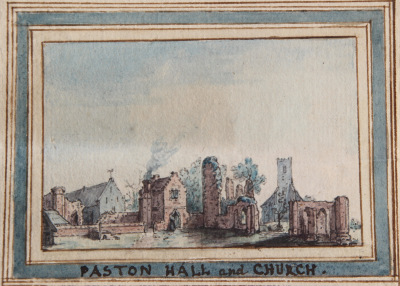 Extracts from The Educated Pin by Majorie Mack 1910:
"So indeed we doted on asparagus; nevertheless, when the emergence of a little fragment of tiled floor beneath the asparagus bed in the flint walled kitchen garden conincided with the arrival of a party of young guests for a long Easter week-end, the temptation to tear this old secret out of the earth was too great. Coats were flung off, asparagus roots and earth were flung aside, and the shoveliing proceeded feverishly till a whol perfect little tiled hexagonal chamber stood revealed to the April sun." p.16

"The whole estate of the Pastons was bought by Lord Anson on his return from the famous voyage round the world. He it was who demolished the ruins of the old 15th century hall and the Tudor farmhouse and built the orginal part of the new hall on the cellars probably of the latter. This theory, which is your grandmother Susannah's, is based on the fact that the cellars of the present Paston Hall are enormous, even for cellars built by a sailor in so thirsty an age. In the wall immediately above them, she has shown me some of those little slim bricks used in the day of the Tudors. p.16

William Paston by Edgar Robbins 1932
"Paston was also repairing the chapel and parlour of his mansion" p.22