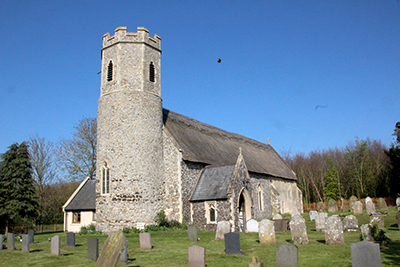 The parish church of St. Peter and St. Paul Mautby.Margaret Paston, née Mautby, was born into the ancient families of Mautby and Berney, sharing her surname with the name of the parish. The two families owned much of the good land in the district. Margaret, who was heiress to many of these estates, married John Paston in 1441.

Judge William Paston had waited until middle age to marry; by then he had acquired lands and the accompanying income. As a result his first son John was born into a family which was well-off and known in north-east Norfolk. He was thus a younger man when he married, approaching the end of his studies at Cambridge University. He offered good prospects as a husband; Margaret offered good prospects as an heiress. Margaret was an only child, her father dying when she was eleven or twelve. 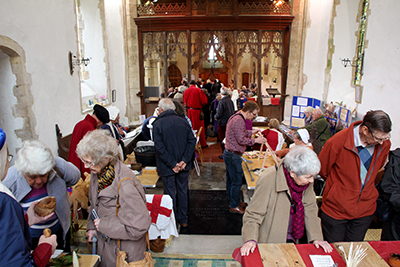 The people of 21st century Mautby gather to recall the Paston and Mautby linksPaston Historian Helen Castor outlines the process of an arranged marriage in her book 'Blood and Roses'. A letter from John mother tells us that, "And as for the furste aqweyntaunce be twhen John Paston and the seyde gentylwomman, she made hym gentil cher in gyntyl wise, and seyde, he was verrayly your son. And so I hope ther shall nede no gret trete be twyxe hym." Her optimism for the match became a long and successful marriage, Margaret adding the lands of Mautby to those already due to John from his own family.

Together, John and Margaret defended their inheritance – John, a lawyer, often in London, with Margaret managing things in Norfolk. This state of affairs led Margaret to become the author of a great many of the famous Paston Letters. It is their correspondence which reveals to us the up and downs of family life in the mid-19th century. 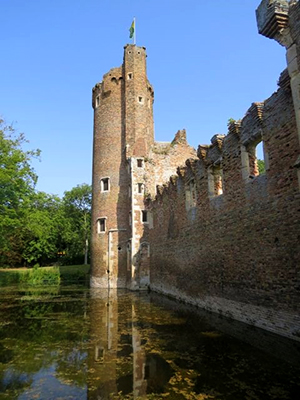 The tower of Sir John Fastolf's castle could be seen from Mautby.John Paston worked for Sir John Fastolf of nearby Caister Castle and in 1459 controversially inherited Fastolf’s castle and estates. Caister Castle had been built to the best of continental designs and was one of the first to be of brick, with the clay from the banks of the River Bure being fired in kilns nearby.

In 1469 the Duke of Norfolk laid siege with a large force and captured the Castle. The Pastons finally secured rightful ownership of the Castle and many of the estates on the Isle of Flegg – one of the most fertile areas of land in the country and close to the trading opportunities at Great Yarmouth. The other important local family were the Cleres of Ormesby and Stokesby. The Pastons and the Cleres were often bound by marriage and by mutual interests.

During Kett’s rebellion in 1549, two cannon from Caister Castle were transported by river to help with the defence of Norwich. The Castle was sold in the mid 17th Century as the Paston family struggled to meet their debts. 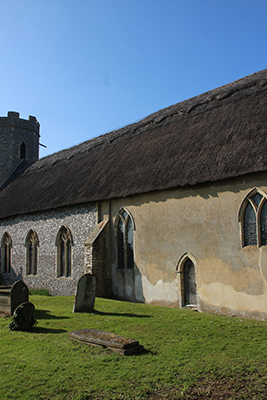 We can do no better than say that Margaret's grave lies somewhere in this area.The lands surrounding Mautby and Caister brought the Pastons much of their wealth and influence. Caister Castle provided the family with the symbol of social standing and power that they had sought with such determination. The Paston Letters provide a detailed and vivid insight into the family's fortunes.

On his death in London John Paston was brought back to north Norfolk with great ceremonial to be interred at Bromholm Priory; Margaret Paston made her final journey back to her childhood home at Mautby where she was laid to rest in a side aisle of the parish church. Her will states,"... my body to be beried in the ele of the cherch of Mauteby byfore the ymage of Our Lady there, jn which ele reste the bodies of diuers of my anceteres. who sowles God assoile."That section of the church was demolished at the time of the reformation and there is no marked grave for Margaret. As part of the Paston Footprints 600 project. a memorial stone was placed beside the church in 2019. 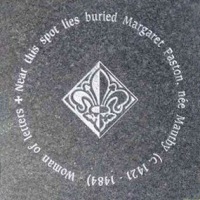 The stone put in place for Margaret by the Footprints projectThe current building called Mautby Hall is a post medieval hall on the site of a medieval manor house. It is the medieval building that Margaret would have known; 14th century accounts describe some of the buildings and the gardens in the manorial complex. In writing her will, Margaret describes the manor house in some detail. It had a chapel, a Great Chamber and a Chapel Chamber. The will also describes the contents of her parlour which included green wall hangings and a curtained bedstead.

Amongst the many donations she made in her will, every household in Mautby was to receive 12 pence.