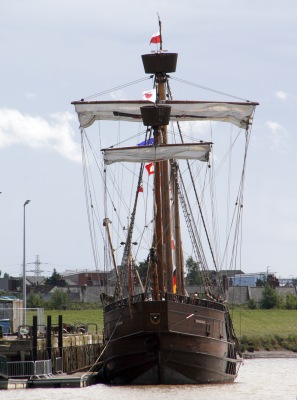 The replica 15th century caravel 'Lisa von Lubec' lies alongside at King's Lynn - perhaps the 'Marè Talbot' looked similarIn 1420, when Judge William Paston married Agnes Berry of Horwellbury, near Royston, he also gained a grazing estate at Snailwell, near Newmarket. The Judge’s frequent journeys from Norfolk to the courts in London would then have allowed him to visit and lodge at both estates. In the 1430s the Judge added property at Sporle and Great Cressingham, both near Swaffham and on the route westwards.

In 1462, there is a letter from King’s Lynn from John Paston III, reporting to his father John Paston I on the progress of his attempt to gain command of the vessel the Marie Talbot for his elder brother, John II. At this time, following the defeat of the Lancastrian forces at Towton in 1461, ships were being commandeered to counter a threat from Scotland.

Exiled for a year

In 1469, the headstrong daughter of John and Margaret Paston, Margery, and her betrothed, Richard Calle, were exiled for a year by the Bishop of Norwich to the Benedictine Blackborough Priory near King’s Lynn.

In the febrile atmosphere following the Lancastrian victory at Bosworth in 1485, we have a letter from Sir Edmund Bedingfeld of Oxburgh, close to the Paston estate at Great Cressingham, warning his cousin Sir John Paston III of rumours about Paston’s friendship with those who were accused of supporting the rebellion of Lambert Simnel. The family links between the Pastons and the Bedingfelds were further strengthened by marriages in the 16th, 17th and 18th centuries, as well as the most significant, in the 19th (see below).

In 1487 Sir John Paston III, in his capacity as Deputy Lord High Admiral, was required to pass ruling over the fate of a beached whale at Thornham in North West Norfolk. Paston’s responsibilities would have covered the coast and ports from King's Lynn to Yarmouth.

Accompanied by a bloodhound

In 1596, Edward Paston built a fine house at Appleton, near Sandringham, on land given him by his Uncle Clement Paston of Oxnead. Edward Paston, a devout Roman Catholic and patron of the sacred music of the time, built a secret chapel for celebrating Mass in the nearby forest. There is an account by Edward’s cousin Mary Berney of a narrow escape from a raid by the authorities, who were accompanied by a bloodhound… "who stood snuffing about the secret place where the priest was; but before the searchers espied him, comes a great cat and fell a fighting with the dog, never leaving him till he departed from thence; which seemed an admirable thing that the poor cat was not afeard to set upon the dog. So would our Lord deliver them by this means’’.

Appleton Hall played host to a bizarre incident in 1643 involving the arrest of Roger L’Estrange as a spy. (More on this incident in the Civil War section).

Edward Paston’s descendants lived at Appleton until the house was destroyed by fire in 1707, whereupon the family moved to Horton in Gloucestershire.

Survival of the family name

In 1826 Henry Bedingfeld (of Oxburgh) married Margaret Paston, the last of her line. The arrangement was for Margaret’s inheritance to be used for repairs to Oxburgh Hall and, in exchange, for the family name to survive, as it does to this day, as Paston-Bedingfeld.

The Hall is also famous as a Catholic outpost in Elizabethan times, when Nicholas Owen constructed a priest hole there. In 1588, the Jesuit Father John Gerard landed secretly at Bacton, near Paston, and visited a number of leading Catholic families in Norfolk.

Oxburgh Hall remains the home of the Bedingfeld family and is also a National Trust property. It has a number of portraits of members of the Paston family.