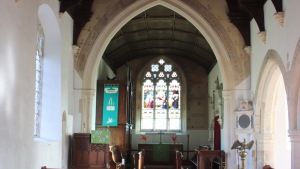 Topcroft church, 2020, where Margery and John were married.These heartfelt words are perhaps the most famous in the Paston letter collection. In February 1477, a young Margery Brewes wrote to her soon-to-be husband, John Paston III, a future MP, calling him her Valentine. This fifteenth-century letter, penned by a clerk from Margery’s dictation in the Norfolk village of Topcroft, is the first instance in written English of a loved one being called a Valentine.

Prior to this letter, Valentine’s was a lesser-known Saint’s day. The 14th February was regarded as the beginning of the bird mating season and with love in the air, Valentine’s day had previously been celebrated in poetry in England, most notably in Chaucer’s fourteenth-century Parliament of Fowles. Why, then, does Margery write her letter?

There is no doubt this Valentine letter has endearing phrases, even a little bit of love poetry. Margery composes these lines, clearly attempting to convince John not to give up on her and that their love is blossoming:

and if you command me to keep me true wherever I go
I wise I will do all my might you to love and never no more.
And if my freendys say that I do amys, they shal not me let so for to do.
Myn herte me bydds euer more to love yowe
Truly ouer all erthely thing.

Margery’s ‘poetry’ lends itself the kind of love declaration we would expect today (‘my heart loves you above all earthly things’). In 1477 she was a young woman, in her late teens or early twenties, dappling in love expressions and pledging to be the best wife: ‘if that you love me as I tryste verely that you do you will not leave me'. 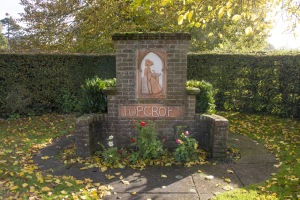 Margery is remembered in her home village in the 21st century by the village sign.By contrast, John was 33, had been linked with previously with ten women, but none had progressed to marriage, and was in need of a wife. But, keeping true to the Paston trait, he was ambitious, and desired to have a larger dowry than the one being offered for Margery. The second son, he was not expected to inherit. Margery's father (Sir Thomas Brewes of Sall, a former knight of the shire for Norfolk in parliament 1460-61) but not the wealthiest, was reluctant to increase the dowry on offer for his eldest daughter. Meanwhile, John's older brother (also called John) was disgruntled his younger brother had not asked his permission to pursue Margery. It appeared to be stalemate, with the possibility of an eleventh failed marriage attempt looming.

How was this impasse resolved? It was Margery's mother, Elizabeth, who saw Margery was well suited to John in their affections and supported the match, enabling it to happen. Elizabeth got the families to talk and agree to the marriage, inviting John to meet and negotiate with his potential father-in-law, with this invitation:

Friday is St Valentine's Day, and every bird chooseth him a mate; and if it like you to come on Thursday at night and so purvey you that you may abide there til Monday, I trust to God that you shall so speak to my husband; and I shall pray that we shall bring the matter to a conclusion.

John and Margery were married two months after this Valentine’s weekend. 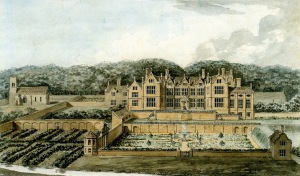 Margery and John lived for a while at Oxnead Hall. The is an Oxneqad Road in Topcroft today.
Margery’s letter, though, also played a role. In this letter we see a fascinating insight into the social negotiations and enterprising bargaining techniques involved in marriage-making in the Middle Ages. Margery attempts to convince John she would still marry him even if he owned only half the estate that he had. Whether or not her letter was a genuine expression of love or in fact a shrewd move to ensure she married well, there is no doubt about the affections in her later letters towards her husband. Their love not only blossomed but endured. With the death of his brother in London a mere two years after this Valentine exchange (of 'the sickness’, which was likely to have been the plague), John Paston III’s fate was changed. He, along with Margery, became head of the Paston family and eventually a Lord High Admiral.

Of course, Margery would have had no idea that her love letter would become such a momentous public document, hailed as the earliest surviving Valentine's letter in the world. We can't help but feel a little bit like eavesdroppers when we read her final line: 'I beseech you that this bill be not seen of none earthly creature save only yourself'. Little did she know that she was marrying into an avid letter collecting family.

Margery is buried at Whitefriar's bridge in Norwich. Perhaps 21st-century love declarations on the bridge could become a 'thing' on Valentine's day, to walk in the footprints of Margery?

The British Library, where Margery’s letters are now held, have a blog post on the Valentine letter. You can view the original letter and hear it being read aloud.