The Pastons and the Hundred Years' War

Among the earliest of the papers in the Paston Letters held at the British Library is a list entitled ‘Henry V’s Conquests in France’, relating to 1417 to 1419. John Fenn and Norman Davis do not include it in their canon of the letters, but James Gairdner does. It is certainly not a letter, and the author is not known, but it records the series of Henry’s victories and some of the key players in events. 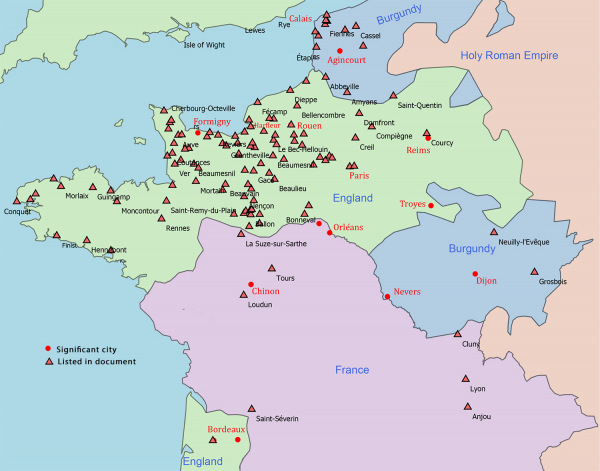 The lands held by England at the time of the Treaty of Troyes, 1420. It shows the castles listed in the Paston document as captured during Henry V's campaign of 1417-1419. The Treaty sought to unite the crowns of England and France under one monarch – Henry V and his heirs – thereby intending to end the Hundred Years’ War, but was of little lasting effect.Taking the Hundred Years’ War – actually a series of conflicts – to have run from 1337 to 1453, the latter stages of the war fall within the period of the Letters. It would seem natural, whatever the original source, that the list of battles should be stored in the muniment room at Oxnead alongside a great variety of other documents.

The Letters of John Fastolf

Of the personnel in the Letters, the most active participant in the war was Sir John Fastolf, who would boost Paston family fortunes by leaving a great deal of property to John Paston (1421-1466). Fastolf wrote a number of letters to Ser (ie Reverend) Thomas Howes, his chaplain, as well as to other associates and to his stepson, Stephen Scrope, from Calais. After his return from France and move to Caister from Southwark, there were an increasing number of letters dealing with Fastolf’s business affairs and the collection of rents. His earlier service in France as one of Henry V’s chief commanders was represented by those letters which refer to moneys he reckons to be owed from French properties he was given.

In the last years of Fastolf’s life, his trust in John Paston as his lawyer grew. Even at Fastolf’s death in 1460, John Paston was dealing with matters that harked back to Fastolf’s time and his responsibilities in France. 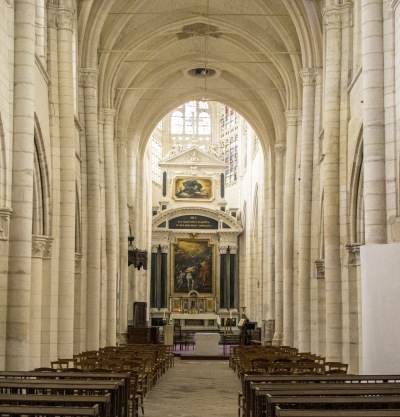 The church of Saint-Jean-au-Marché at Troyes, where it was hoped the marriage of Henry V and Catherine Valois might seal an alliance between England and Burgundy.

The last battle of the Hundred Years’ War is generally considered to be that of Castillon in 1453, though there was not an official peace until the Treaty of Picquigny in 1475, at the conclusion of Edward IV’s separate French campaign of that year. The Letters passed on such news as the Pastons and their staff obtained as events unfolded; the Lords of the French wars and the politics surrounding the King were regularly passed on. One of the most significant - if not heartfelt - letters is that from William Lomnor in 1450. William de la Pole, Earl (and, from 1448, Duke) of Suffolk, was a statesman and commander in the Hundred Years’ War. In 1415, he was seriously wounded at the siege of Harfleur, where his father died from dysentery, while later in the same year his older brother was killed at Agincourt, whereby he acceded to the earldom. Later, back in England, he became very influential in the court of the weak King Henry VI. In this role he also made enemies, and Lomnor wrote to report his execution at sea while being exiled to Calais in 1450.

Reports of other events were included in various letters, such as the French victory at the Battle of Formigny, 1450, also mentioned in Lumnor's letter. These passing comments illustrate the way news travelled around the country at the time. The whereabouts and moves of the influential lords of the realm were also reported.

Mentions of Calais increased in the letters from the years which witnessed the English forces falling back to an increasingly small area of France. With the rule of law breaking down in England under the weak king, there was still occasion to append news from France, with barely a foot of land now under English rule in Normandy, Cherbourg lost and a siege expected in Calais.

It was after the final fighting of the Hundred Years’ War that we find the brothers John Paston hoping to meet in Calais. It would be nearly a century later, in 1558, before this last outpost of England across the Channel would fall to France.