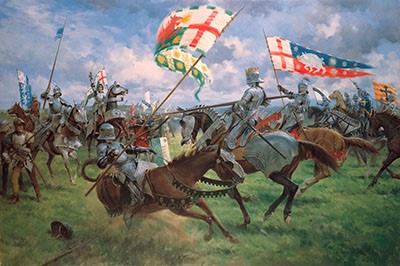 The matter is decided, Bosworth Field, © 2020 graham@studio88.co.ukSome Causes of the Wars of the Roses

We can trace the impact of the Black Death on the local population and the subsequent growth in the bargaining power of the surviving work force (in north Norfolk recent research suggest up to 75% of the population perished). Land was also more freely available. A village elite developed and it was this group that were penalised by the increases in the Poll Tax and who subsequently led the revolt. In Norfolk the rebellion was ruthlessly terminated at North Walsham by Bishop Despenser. However, the growth of something approaching a middle class – which included families like the Pastons, was to create further social tensions.

Another contributory factor was the defeat in the wars with France. The backlash from this helped to seal the Duke of Suffolk’s fate. The returning soldiers added to the power of the private armies of the aristocracy. Jack Cade’s rebellion of 1450 was made up of many ex soldiers home from the France.

The weakness of the monarchy created a vacuum. Some have described the period as the ‘Cousins’ War’ as there were many potential claimants to the throne from all sides of what was a very large Royal family. The term ‘Wars of the Roses’ was a later characterisation favoured by Shakespeare and others.

Into this vacuum strode Warwick ‘The Kingmaker’ and the powerful magnates took and changed sides as it suited them. The Pastons avoided nailing their colours to any particular mast until fighting at Barnet in 1471 with their benefactor the Lancastrian Earl of Oxford. John Paston 3 was wounded in the battle. The fact that John Paston also placed his eldest son to lobby at the Court of the Yorkist King Edward and his second son with the Yorkist Duke of Norfolk, demonstrates that allegiances were often largely pragmatic.

During the 1460’s and 70’s it may have suited King Edward to have two of his powerful East Anglia Dukes distracted by the squabbles with the Pastons.

The Pastons were later pardoned by Edward for fighting for the opposite side. It may have helped that John Paston 2 once jousted on King Edward’s team at Eltham.

With the triumph at Bosworth of the Earl of Oxford and Henry Tudor, the Paston family finished on the winning side - although it was to be several years before England finally achieved stability.

Describe some of the possible causes of the Wars of the Roses -which one do you think was likely to be the main cause?

Why do you think some people describe this period as ‘The Cousins War’?

Why did John and Margaret Paston find themselves in a difficult position in 1444?

The Pastons had no private army. How could they protect themselves at this time?

The Siege of Caister Castle in 1469 can be described as the only ‘Battle’ of the time to have taken place in East Anglia. Why do you think that the main Battles took place near London, Tewkesbury or in Yorkshire?

Were the Pastons Yorkists or Lancastrians?

How did the Pastons manage to emerge successfully from this time of war?

Describe some of the difficult decisions that the Pastons had to make.

Use the information on the www.thisispaston.co.uk web site to describe some of the weapons that were in use at this time.

Make a drawing of the equipment that the Paston brothers might have had at the Battle of Barnet, including the Paston Coat of Arms. Use the illustration of the wounded John Paston III to help you.

Imagine a list of rules that would have been issued to the Paston Household at Caister during the Siege.

Work with a partner to imagine some of Margaret Paston's diary entries for this period. Share them with the class.

Use the information on Castles on the web site to produce a Tourist Guide to the Castles of the Wars of the Roses.