The Paston documents refer to towns, villages and manors across Norfolk, as well as much further afield

Throughout the Footprints project, opening up the whole canon of the Paston Letters and Documents has been an aim. There is much still to be done, but already a great deal has been achieved. Comprehensive use of the letters for modern data analysis requires them all to be entered and checked, but some routines can already offer interesting results. One of the recent facilities introduced is to plot data to maps - the first implementation being to show all the places mentioned in the medieval letters. If your town or village is mentioned in the Paston Letters, you can link to all the references from the map.

The picture on this page is for illustration; to use the map searching facility click on Map Places in the Letters to jump direct to an interactive page in the Paston Letters section of this site. 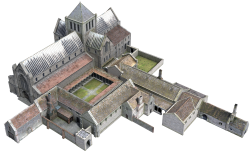 The completed image of the central area of the Bromholm priory, with the church, cloisters and living quarters

One of the most exciting visual aspects of Paston Footprints is the recreation of several of the places associated with the family those several centuries ago. Work is continuing on the virtual Bromholm Priory at Bacton, based on the documentary, written and remains on site evidence that we have been able to draw together.

The remains of the various parts of the buildings, though greatly damaged since the closure of the priory in the time of Henry VIII, do at least give a firm ground plan and investigations by many specialists since the late 1700s have been used as the basis of the reconstruction - though of course it is necessary to add a degree of speculation where evidence is lacking. The 3D model of the central area is now complete and work proceeds on the external area, out to the priory walls and the north gatehouse.

The relationship between the establishment of the priory, the rights of the Prior, the burial there of family members such as John Paston, all figure in the letters. The initial stages were presented at a meeting in the village in November; whilst the massive works of the gas terminal may dwarf the local landscape today, the sheer size of the priory must have been as dominating in the centuries it existed.

A click on a virtual Bromholm Priory will take you to the story in the 'Virtual Pastons' section of this web site.

Analysis of the Letters 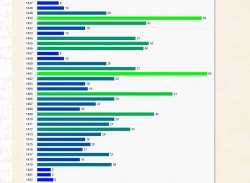 As we are able to put more of the Paston Letters onto this website so the opportunities for research and analysis grow. As with all databases, we have to consider the overall coverage and consistency of the data and nowhere more-so than with these letters. The is explicitly revealed by the first of graphing tools we have been able to put into place.

The graph opposite shows that 1450 and 1461 were busy years for letters - or more correctly, for documents that have survived to the present day. By going to Using Graphs for Analysis you can investigate using your own parameters; if you choose the range from 1417 to 1717 you will see the 16th century offers us no letters and illustrates how we must consider the outputs we can gain from our analysis.

There'll be more ways of exploring the letters coming along; if you have ideas for questions you'd like to ask, by all means register for the site through the Volunteers page and you can join in by using the forum. 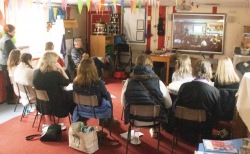 For the start of 2020, a group of teachers gathered at Blofield School to look at the opportunities offered by the Key Stage 2 module 'Through the Door'. The link will take you directly to the module within our new 'Teaching' option from the main menu.

We now have teaching materials based on the Pastons and their documents across a range of ages, so the decision was made to separate them out into one area for ease of use. The 'Through the Door' module comes with a wealth of guidance and resources developed and trialled with the 7-11 age group (KS2 in English teaching terminology but of course applicable for that age group on a much wider front). One of the trial sessions in the classroom was videoed and we'll be adding extracts of that occasion the the Teachers' Manual which you can download.

You've probably already discovered the pages about the 3D 'virtual' images of Paston buildings that are being rebuilt as part of the Footprints project. There's a special area on the web site devoted to 'Virtual Pastons'.

The models are already used in a number of ways on the web site and there's many more used to come. We can present them as 3D imagery or use them to produce explanatory videos about aspects of life in the time of the Pastons. The first fully completed model was that for Paston Hall. Commenced in the 14th century, the Hall was at its peak around 1600AD, when the great barn, still to be seen at Paston, was built alongside it.

A video was produced to put the Tudor house into the modern landscape; below you can see an explanation of how this was achieved through a mix of modelling and drone photography.

The Mautby History Group put on a Saturday event at Mautby church. Margaret Paston, a native of the village, is buried somewhere alongside the church but there is no evidence of the precise location of her grave. However, it was a very appropriate location to remember her. Since his event, and as part of the Footprints project, a memorial stone to Margaret Paston has been put in place beside the church. Mautby is also one of the first locations for which a walk map is available as a download or in print; click to go to a Mautby page with the link for The Paston Pathways Mautby Walk at the bottom of the page.

One of the homes of the Paston family was the castle in the north Norfolk village of Gresham. Today the remains of the castle are not generally accessible, lying as they do in the middle of a field of grain. The village primary school took the lead in trying to find out more about the castle; a group visited to see what could still be seen. Margaret Paston, with her man Daubney, was there to explain the 'battle' that took place to throw her out. The redoubtable Margaret refused to leave and had to be carried out in her chair! You can click to go to the latest work in the Paston Footprints project on Gresham and its castle